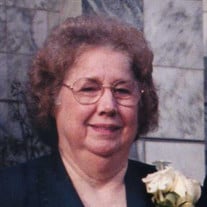 Anna Lou (Farley) Meissner, 89, died Wednesday, August 28, 2019, at her son’s home in Bedford, IN. She was born April 16, 1930 in Loyal, Harlan County, Kentucky and was the daughter of Floyd and Daisy (King) Farley. She was 1950 graduate of Providence Catholic High School in Joliet, IL and retired in September 1992 from Crane where she worked as an accountant. Anna Lou enjoyed reading and corresponding with family about genealogy and she loved visiting her family in Harlan County, KY where she was raised. Anna Lou married Elmer E. Meissner on September 19, 1959 at St. John’s Catholic Church in Loogootee, IN. He preceded her in death November 13, 2003. She is survived by two sons, Michael (Sue) Meissner of Bloomington and Chris (Anita) Meissner of Bedford; a granddaughter, Brittney (D.J.) Reynolds; a sister, Mary Rose (Gerald) Frye of Jasper; sister-in-law, Mauricette Farley of Carmel; as well as several nieces and nephews. She was preceded in death by her parents, sisters and brothers-in-law: Carrie and Arthur Saylor, Marie and Carl Bohn, Grace and Ernie Beasley, Dorothy and Carl Beasley; brothers and sisters-in-law: King Farley, Herbert and Shirley Farley, Jim and Janette Farley, Charles Farley, Allen Farley and Clifford Farley; and a granddaughter, Elizabeth Meissner. Funeral services for Anna Lou Meissner will be held at 3:00 P.M. on Friday, August 30, 2019 at Ferguson-Lee Chapel of Thorne-George Family Funeral Homes with Father Rick Eldred and Deacon Dave Reising. Burial will follow at Cresthaven Memory Gardens in Bedford. Visitation will be from 1 – 3 P.M. on Friday, August 30, 2019. The Rosary will be prayed at 2:30 P.M. In lieu of flowers memorial contributions may be made to Ferguson-Lee to assist with funeral expenses at https://secure.goemerchant.com/secure/custompayment/thornegeorgefamilyfuneral/12613/default.aspx Online condolences may be made to the family at www.fergusonlee.com

The family of Anna Lou Meissner created this Life Tributes page to make it easy to share your memories.

Send flowers to the Meissner family.