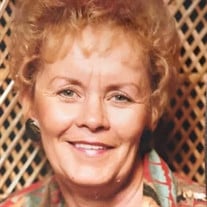 Bedford – Beverly Ann Watterson Kern Martin, 80, of Bedford, died at 7:18 Sunday morning, July 18, 2021, at Westview Nursing and Rehabilitation Center surrounded by family. Born January 2, 1941, in Bedford, she was the daughter of Cecil Watterson & Bernice Starr. She married Jasper Martin on February 5, 1994, and he survives. Bev received her GED from Bedford North Lawrence High School. She was a homemaker for most of her life. She did seasonal work and was employed at Kmart. She was a breast cancer survivor of 20-plus years. She took up painting in her 50s and many of her works of art, patterned after Thomas Kinkade, are displayed in the homes of family and friends. Bev loved the Lord and for many years worked with children and youth at Dive Christian Church, where she was a longtime member. Later in life, she became a member of Hillcrest Christian Church. She liked to fish and enjoyed listening to music. Bev was on a bowling team for many years. She was a fan of the Indianapolis Colts and auto racing. Bev was also a pet lover and gave a loving home to many cats and dogs through the years. Mostly, though, Bev enjoyed spending time with her family and friends. Survivors include her husband Jasper; son, Kevin (Brenda) Kern of Bedford; daughters Kelly (Gary) Houk of Silverville, and Kimberly Leeann (Jeff) Hauersperger of Bloomington; stepdaughter Vicki Schlegel of Mitchell, and stepson Randall Martin of Bedford. She is survived by nine grandchildren: Dustin (Brittany) Kern, Tara Kern, Lora Kern, Rob Kern all of Bedford, Natalie (Bryan) Banks, Nate, Dawson, and Sarah Hauersperger, all of Bloomington, and Jarrin (Pete) Ferguson of Cookeville, TN., and three step granddaughters: Jocelyn and Audrey Schlegel, both of Louisville, Ky., and Fiona Schlegel of New York, N.Y.; and 15 great-grandchildren. Bev was preceded in death by her parents, a brother who died in infancy, and a son-in-law, Bruce Cobb. Visitation will be from 4:00 to 8:00 pm Thursday, July 22, 2021, at Ferguson Lee Chapel of Thorne-George Family Funeral Homes in Bedford, and from Noon to 1:00 pm on Friday, July 23, 2021. Funeral services will be conducted at 1:00 pm at Ferguson-Lee Chapel with Pastor Jeff Hauersperger officiating. Graveside committal will immediately follow at Leatherwood Cemetery. The family asks that friends consider memorial contributions be made to Lawrence County Cancer Patient Services.

The family of Beverly Ann Kern Martin created this Life Tributes page to make it easy to share your memories.