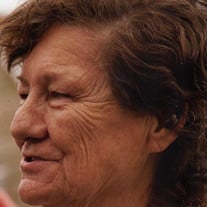 Bonnie Sue Thomas April 21, 1940 – March 20, 2019 Bonnie Sue Thomas, 78, of Bloomington, passed away on Wednesday, March 20, 2019 at Golden Living Nursing Home, Bloomington. Born April 21, 1940, in Taswell, Indiana, she was the daughter of Seth and Auda (Fodge) Thomas. She married Robert J. Fields and he preceded her in death on April 8, 2006. Bonnie retired from Carpenters in Mitchell, Indiana. She attended Dive Christian Church. She was a past member of the Eagles and Moose Lodge. Bonnie loved cake decorating and was an avid collector of things. She was a force to be reckoned with but she will be missed by all who knew her. Surviving are her daughter, Victoria C. (Fields) Lopez; grandson, Adam C. Jones; nieces and nephews, Julia (Kevin) Taylor and John Thomas, of Bluffton, Rodney (Penny) Thomas, of Greenfield; Dorothy (Jim) Barrett, of Bedford, and Marie (Jerry) Whooten, of Kentucky; and several great-nieces and great-nephews. She was preceded in death by her parents; husband, Robert; son, Timothy Eugene Thomas; one sister, A.Diane Patton; brothers, Seth E., Dallas L., and James E. Thomas; and nephew, Mark Tolbert. Funeral service will be at 11:00 A.M. on Saturday, March 23, 2019 at the Ferguson-Lee Chapel of Thorne-George Family Funeral Homes, with Pastor Mike Eads officiating. Burial will be at a later date in Mt. Lebanon Cemetery in French Lick, Indiana. Visitation will be from 9 A.M. until the service hour Saturday at the funeral chapel.

The family of Bonnie Sue Thomas created this Life Tributes page to make it easy to share your memories.

Send flowers to the Thomas family.