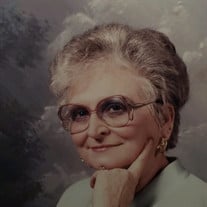 Bonnie Mae Young, 84, of Bedford, passed away Wednesday, November 7, 2018 at Stonebridge Health Campus. Born December 9, 1933 in Jackson County, Mrs. Young was the daughter of William Ralph Heller and Sarah Ruth (Sam) Huston. She was previously married to William Charles Young and he preceded her in death on December 20, 2003. Mrs. Young attended Bedford High School and was of the protestant faith. She had worked at BRMC in the Chemical Dependency Center, was a Home Health Nursing Assistant, worked at Crane, and for several years worked for the DNR. Survivors include one daughter, Mara Eisele of Bedford; one son, Charles (Donna) Young of Salem, IN; four grandchildren: Steve (Misty) Nicholas, Brad (Rachel) Young, Brian (Carrie) Young, and Zachary (Rachelle) Eisele; one Step- grandson, Jason Eisele; 18 great-grandchildren; and several nieces, nephews and cousins. She was preceded in death by her parents; two brothers: Horace Hamilton and Michael Huston; and one great-granddaughter, Lailah Rae Eisele. Funeral services will be at 1pm on Saturday, November 10, 2018 at the Ferguson-Lee Chapel of Thorne-George Family Funeral Homes in Bedford with burial to follow at Mt. Pleasant Baptist Cemetery in Orleans, IN. Visitation will be on Saturday, November 10, 2018 at Ferguson Lee Chapel from 10am until the time of the funeral services. Memorial contributions in Memory of Bonnie Mae Young may be made to the Lawrence County Cancer Patient Services or the Lawrence Country Alzheimer’s Association through the funeral home, and online condolence can be sent to the family at www.FergusonLee.com.

The family of Bonnie Mae Young created this Life Tributes page to make it easy to share your memories.

Send flowers to the Young family.