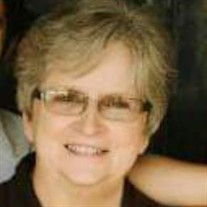 N. Carol Moore, 71, of Bedford, passed away on Wednesday, March 13, 2019, at IU Health Methodist Hospital. Born October 24, 1947, in Bedford, she was the daughter of Harley and Alice (Barnett) Brown. She married Frank Moore, on October 4, 1969, and he preceded her in death on December 20, 1998. Carol was a graduate of Tunnelton High School Class of 1965 and a graduate of House of James Beauty School in Bedford. She was a member of the Landmark Missionary Baptist Church. Carol loved her grandchildren, scrapbooking. She made scrapbooks for Free Methodist preschool graduates for over a decade. She loved to travel and to sit on the front porch with her family. Carol never lost her faith in her Lord. She retired from General Motors in 2007. Surviving are one daughter, Stephanie (Barry) Ryan, of Bedford; four grandchildren, Nita Pettiford, Crystal Stigall, R.W. Ryan, and Abbey (Will) Ryan Teague; one expectant great-grandchild, Carol Jean “C.J.” Teague; one sister, Gayle (Edward) Gilstrap, of Bedford; one brother, Harley (Linda) Brown, of Oro Valley, Arizona; and several nieces and nephews. She was preceded in death by her parents; husband of 28 years, Frank Moore; David Holmes, married in 2007; one son, Tony Stigall; three sisters, Jeanette Kern, Fay Pate, and Kay Brown. Funeral services will be at 11:00 A.M. on Tuesday, March 19, 2019, at the Ferguson-Lee Chapel of Thorne-George Family Funeral Homes, with Brother Martin Lamb officiating. Burial will follow in Leatherwood Cemetery. Visitation will be from 4-8 P.M. on Monday at the funeral chapel. Memorial contributions may be made to the Landmark Missionary Baptist Church Mission Fund. Online condolences may be sent to the family at www.fergusonlee.com.

The family of Carol Moore created this Life Tributes page to make it easy to share your memories.

Send flowers to the Moore family.