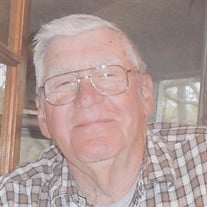 Charles “Charlie” E. Myers, 89, of Leesville, passed away Aug. 30, 2021, in Indianapolis. He was born in Lawrence County on August 18, 1932 to Merle and Thelma (Brewer) Myers. He married Marilyn Browning on April 20, 1959 and she preceded him in death on July 4, 1995. Charlie attended Tunnelton High School and was a member of the Church of the Nazarene. He was a veteran of the U. S. Army, having served during the Korean Conflict from December 11, 1952 – December 11, 1954 where he received a Purple Heart and Bronze Star. He was owner of Charlie’s Frame Alignment in Leesville until he retired in 1999 and had previously worked at Bear Alignment in Bedford. Charlie loved fishing, hunting and operating equipment. Surviving to cherish Charlie’s memory are his sons, Brian E. (Angela) Myers and Brad (Sherry) Myers; six grandchildren, Kristy Myers, Dakota (Kaelynn) Myers, T.J. (Katie) Martin, Rob Martin, Clayton (Bretta) Myers, Leah (Edward Carnes) Myers; nine great-grandchildren; 2 step great-grandchildren; several nieces and nephews; and one sister, Wilma Fields. Preceding Charlie in death were his parents; wife, Marilyn; and his companion, Bonnie Edwards; brother-in-law Ralph “Bud” Fields. Funeral services for Charlie will be held at Saturday, September 4, 2021 at 11am at Ferguson-Lee Chapel of Thorne-George Family Funeral Homes with Don Lee officiating. Burial will follow at Dixon Chapel Cemetery. Visitation will be Friday from 4-8:00pm at Ferguson-Lee Chapel. Memorial contributions for Charlie may be made to Dixon Chapel Cemetery.

The family of Charles "Charlie" Myers created this Life Tributes page to make it easy to share your memories.

Send flowers to the Myers family.