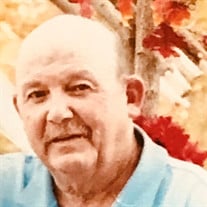 Chester “Chuck” Grant Tolliver Jr, 70, of Bedford, passed away on Monday, July 15, 2019 at IU Health Hospice House, Bloomington. Born July 9, 1949, in Lawrence County, he was the son of Chester G. Sr. and Ruth (Troxell) Tolliver. He married Joyce Prince on June 20, 1973 and she preceded him in death on April 4, 2016. He was a graduate of Oolitic High School with the Class of 1967. Chuck retired from General Electric in 2009. He was a veteran of the United States Army, serving in the Vietnam War with the Military Police. He also served in the Army National Guard. Surviving are his children, Josh (Carrie) Tolliver, Jackie (Rick) Howe, and Stacey (Troy) Barksdale; fourteen grandchildren; three great-grandchildren; fiancé, Kathy Wilson; one brother, Jerry (Ruth Ann) Tolliver; one sister, Karen Kean; and several nieces and nephews. He was preceded in death by his parents; wife, Joyce; brothers, Darrell and Bill Tolliver; and granddaughter, Kaylee. A memorial service will be at 1:00 P.M. on Friday, July 19, 2019 at the Ferguson-Lee Chapel of Thorne-George Family Funeral Homes, with Pastor Reno Bates officiating. Burial will follow in Beech Grove Cemetery. Military rites will be accorded at the grave by members of the American Legion Gillen Post #33. Visitation will be from 11 A.M. until the service hour on Friday at the funeral chapel. Online condolences may be sent to the family at www.fergusonlee.com.

The family of Chuck Tolliver created this Life Tributes page to make it easy to share your memories.

Send flowers to the Tolliver family.