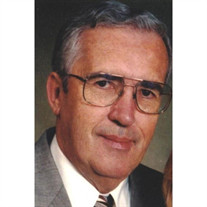 Clifford Bard “Jack” Love, Jr., 82, of Gentry Park in Bloomington, formally of Bedford, died Thursday, February 11, 2021 at Hearthstone Health Campus in Bloomington, Indiana. Cliff, “Jackie”, to his dear mother, was born on November 1, 1938 to Clifford Bard Sr., and Pauline (Chenault) Love in Lawrence County, Indiana. An only child, Jackie was born early, weighing only 3 ¼ pounds. He used to joke that he spent the first few weeks of his life sleeping in a dresser drawer due to his small size. Jack graduated from Shawswick High School in May 1957. At the age of 21, Jack left home and spent two years studying to be an electrician. At 23, he again left home to serve in the Army, spending time in Hawaii and Thailand. Upon discharge from the military, Jack returned to Indiana and began a more than thirty year career as a Switchman for Indiana Bell/AT&T. Clifford “Jack” Love was truly a gentleman. He had a gentle spirit and never failed to act with kindness and love. He enjoyed sharing stories and never knew a stranger. He had many interests that he loved to share with people. These included trains, photography, kites, traveling, gadgets, chess, movies, and Christmas. Grandpa Cliff especially loved to brag about his grandchildren and all their accomplishments. He took great pride in being an “IU Grandpa”. Grandpa Cliff enjoyed taking his grandchildren on day trips to Spring Mill State Park and vacations to Hilton Head Island. He never failed to forget his camera, capturing countless photos of his grandchildren. Grandpa Cliff made every holiday magical, especially Christmas, decorating every inch of the house, complete with three Christmas trees, and two trains. He loved to treat his grandchildren to a trip to Starbucks every time he and grandma picked them up from school. A devoted Grandpa, there was rarely a dance recital, play, variety show, ball game, school program, or pageant he was not present with his camera in tow. Cliff “Jack” is survived by his wife, Violet Shimer Love, whom he married on June 22, 1997. During their almost 24 years together, he was a doting husband, often spending months planning the perfect gift for her birthday or special occasion. Also surviving are his stepson, Michael A. Shimer (Annabell) of San Francisco, CA, stepdaughter, Megan Shimer Axsom (John Collier) of Bloomington, IN and grandchildren: Emily, Andrew, Elizabeth, Michael, and Elias. He was preceded in death by his first wife, Mary Donica Love on March 4, 1995, his father on May 7, 1976, and mother on April 24, 1997. A Celebration of Life will be held Friday, November 12, 2021 from 2pm-4pm at the Ferguson-Lee Chapel of Thorne-George Family Funeral Homes so all who knew and loved Clifford “Jack” Love can celebrate him and share their memories. Arrangements for Mr. Love have been entrusted to the Ferguson-Lee Chapel of Thorne-George Family Funeral Homes in Bedford. Online condolences may be sent to the family at www.FergusonLee.com.

The family of Clifford Bard "Jack" Love, Jr. created this Life Tributes page to make it easy to share your memories.

Send flowers to the Love family.