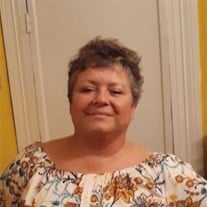 Cynthia Davis August 8, 1964 – December 31, 2018 Cynthia “Cindee” Davis, 54, of Bedford, passed away on December 31, 2018 at Indiana University Methodist Hospital. Born August 8, 1964 in Bedford, Indiana, she was the daughter of Floyd Wilson and Martha (Hutchinson) Cox. She married John Davis on July 14, 1989; and he survives. She was a graduate of BNL with the Class of 1982 and a graduate House of James Beauty College. She attended Second Baptist Church in Bedford. Cindee was a beautician and homemaker. Surviving are her husband, John Davis, of Bedford;father, Floyd Wilson; three children, Brittany Woolridge, of Martinsville, Casey Fleetwood, of Indiana, and Jayden Wilson, of Bloomington; six grandchildren, Logan, Lola, Emma, Ava, Odis, and Cash; one brother, Donald Cox; nephew, Corbin; and two dogs, Emma and Scooter. She was preceded in death by her mother and one sister, Doniese Cox. Funeral service will be at 11:00 A.M. on Wednesday, January 9, 2019 at the Ferguson-Lee Chapel of Thorne-George Family Funeral Homes with Clarence Brown officiating. Visitation will be from 9:00 A.M. until the service hour at the funeral chapel. Memorial contributions may be made to the Ferguson-Lee Chapel to assist the family with funeral expenses.

The family of Cynthia Davis created this Life Tributes page to make it easy to share your memories.

Send flowers to the Davis family.