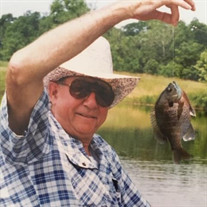 Daniel Adam Gipe July 10, 1931 – March 30, 2019 Daniel Adam Gipe, 87, of Brownsburg, formerly of Bedford, passed away on Saturday, March 30, 2019 at Brownsburg Meadows in Brownsburg, Indiana. Born July 10, 1931, in Columbia City, IN, he was the son of Henry Jake and Alma I. (Spaw) Gipe. He married Marilyn J. Brooking on August 23, 1955 and she survives. Dan was a graduate of Bedford High School Class of 1949. He was a veteran of the United States Army serving as a Combat Construction Engineer in the 43rd Infantry division, stationed in Germany during the Korean War. He was a member of the American Legion Gillen Post #33; lifetime member of the NRA; Bedford Lions Club for 47 years; the Salvation Army Board; the White River Humane Society; IBEW for 45 years; and a member of the Limestone Cowboys. He retired from General Motors in 1996 where he worked as an electrician. Dan attended Donica Church of God. Surviving are his wife, Marilyn Gipe, of Brownsburg; two sons, Tim Gipe, of Mt. Vernon, IN, and Jon (Debbie) Gipe, of Bedford; one daughter, Lynn (Gary) Jump, of Brownsburg; three grandchildren, Jordan (Brittany) Gipe, Matt Jump, and Kasey (Jeremy) Rouse; great-grandchild, Xander Rouse; one sister, Joan Sherfick, of Boise, ID; and several nieces, nephews, and cousins. He was preceded in death by his parents; four sisters, Juanita Miller, Ada Harbstreit, Audra Stevenson, and Eleanor Herman. Funeral service will be at 2:00 P.M. on Wednesday, April 3, 2019 at the Ferguson-Lee Chapel of Thorne-George Family Funeral Homes, with Rev. Jeremy Rouse officiating. Burial will follow in Cresthaven Memory Gardens. Military rites will be accorded at the graveside by members of the American Legion Gillen Post #33. Visitation will be from 3-7 P.M. Tuesday and from noon until the service hour on Wednesday at the funeral chapel. Memorial contributions may be made to the White River Humane Society. Online condolences may be sent to the family at www.fergusonlee.com.

The family of Daniel Adam Gipe created this Life Tributes page to make it easy to share your memories.

Send flowers to the Gipe family.