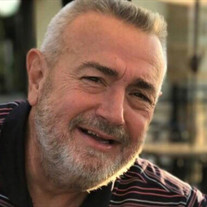 David L. Hanners passed away Friday, February 15, 2019 at IU Health Hospice House in Bloomington, Indiana. He was born November 9, 1948 in Lawrence County to James Houston Hanners and Wilma (Johnson) Baxter. He married Martha Kirkman on June 29, 1968 and she survives. He worked for Kaiser Aluminum for 32 years, later retiring from Reynolds Incorporated. He was also an umpire for Murray Ball Park. David was a graduate of Needmore High School class of 1967 and also attended United Electronics in Louisville, Kentucky. He was member of Tabernacle of Praise. He loved spending time with his family, grandkids and great-grandkids. He also loved his church and making the Easter eggs every year. Surviving are his wife Martha Hanners of Bedford; two daughters, Shelly (Robbie) Sons of Bedford; Tessa (Fiancé Jamie Page) of Bedford; three grandchildren, Zach (Elizabeth ) Sons of Acton, Indiana, Dylan (Fiancé Savana Fuller) Sons of Bedford, Tatom (Cody) Douglas of Bedford; two great-grandchildren Kinsley Ikerd, Colton Sons; Mother Wilma Baxter of Bedford; one brother, Steve (Brenda) Hanners of Bloomington; one half-brother James “Bo” Hanners; two half-sisters, Jamie Hanners and Lori Hanners-Moore; as well as several nieces and nephews. He is preceded in death by his father; one grandson, Trey Ikerd; and one half-sister, Lynn Preece. Funeral service will be at 2:30 P.M. at Tabernacle of Praise on Thursday, February 21, 2019 with Pastor Gary Thomas officiating. Burial will follow in Mt. Pleasant Cemetery. Visitation will be 4-8P.M. on Wednesday, February 20, 2019 and from 1:00 until the service hour on Thursday, at Tabernacle of Praise. Memorial contributions in memory of David Hanners may be made to Tabernacle of Praise Safety Team. Online condolences may be sent to the family at www.fergusonlee.com.

The family of David L. Hanners created this Life Tributes page to make it easy to share your memories.

Send flowers to the Hanners family.