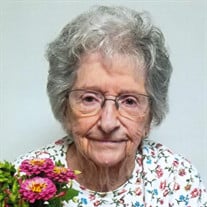 Dorothy E. Nelson August 19, 1918 – June 25, 2020 Dorothy E. Nelson, 101, of Bedford and formerly of Winslow, Indiana, went to be with the Lord on June 25 at the home of her daughter. Born August 19, 1918 in Rockford, Illinois she was the daughter of Jesse and Esther Finch. She married Howard Nelson on March 9, 1935 and he preceded her in death in December of 1994. Dorothy was a member of Englewood Baptist Church and enjoyed working where needed. She even helped wash dishes at a dinner when she was 100. When she lived at Winslow, she taught adult and children’s Sunday school classes. When she and her husband lived in Florida during the winter, she prepared Bible school material so she would be ready to direct and teach Bible school when she returned to Winslow. While living in Florida they attended church and helped where they were needed especially in their church school. Dorothy was preceded in death by her husband, Howard (Froggy); son, Harry; daughter-in-law, Jan; brother, Bob Finch; and her parents, Esther (Reavis) and Jesse Finch. She is survived by her daughter, Sally (Nelson) Kimbley of Bedford; grandsons, Tim Nelson (Joanne DeKemper) of Princeton; Rusty Nelson of Winslow; Joe (Cynthia) Nelson; and great-grandchildren, Mya and Austen Nelson of French Lick; brother, Charles (Jackie) Finch of Evansville; sister-in-law, Mary Finch of Avon; as well as several nieces, nephews and cousins. There will be graveside services at Sunset Cemetery in Winslow, Indiana at 1:00 P.M. on Monday, June 29, 2020 with Pastor Mick Finch, her nephew, and Pastor Stephen Carter officiating. In lieu of flowers, memorial contributions may be made to Englewood Baptist Church, in memory of Dorothy. Online condolences may be sent to the family at www.fergusonlee.com. Arrangements are being entrusted by Ferguson-Lee Chapel of Thorne-George Family Funeral Homes.

The family of Dorothy E. Nelson created this Life Tributes page to make it easy to share your memories.

Send flowers to the Nelson family.