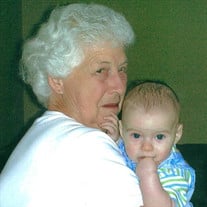 Edna Ruth (Abel) Jackman age 92, of Shoals, passed away February 8, 2022, at Deaconess Gateway Hospital in Newburgh, Indiana. She was born May 24, 1929, in Shoals, Indiana to Frank Columbus and Mae (Mundy) Abel. She married Smith Dalton Jackman and he preceded her in death on November 29, 2001. She graduated Shoals High School Class of 1947, graduated from Indiana State Teachers College in Terre Haute and later obtained her master’s degree in education. She taught school in Decker, Springs Valley, Shoals, and several years in Washington. Ms. Jackman was a member of the Shoals Christian Church where she was organist for many years, was a member of the Generations Board, Delta Kappa Gamma, the Martin County Council on Aging. She was also formerly on the Shoals Library Board. She enjoyed traveling and took many family trips to Europe, loved playing the organ, sewing, tending her roses, cheering on the Purdue Boilermakers, bragging on her grandson, and doting on her dog, Molly. Survivors include her children, Mark Jackman of Bloomington, Janie (Jim) Johnson of Shoals, and Matt (Liz) Jackman of Lansing, Michigan; one grandson, Dashiell Jackman; and several nieces and nephews. She is preceded in death by her parents; husband, Dalton; one brother Lloyd York and one sister, Lois York. Funeral services are 11:00 AM Monday, February 14, 2022, at the Shoals Christian Church with Pastor Mike Newland officiating. Burial will be in the Spring Hill Cemetery. Visitation will be 12:00 PM to 5:00 PM Sunday at the Queen-Lee Chapel in Shoals. The family has made mask available for those who would feel more comfortable attending with one. Memorial contributions may be made to the Shoals Christian Church. The Queen-Lee Chapel of Thorne-George Family Funeral Homes has been entrusted with the arrangements.

The family of Edna Ruth Jackman created this Life Tributes page to make it easy to share your memories.

Send flowers to the Jackman family.