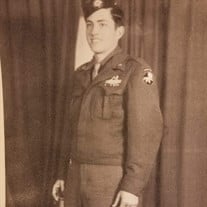 Eugene R. Brown, 93, of Bedford, passed away at his residence on Tuesday, May 28, 2019. Born December 24, 1925 in Lawrence County, Indiana, he was the son of Ralph and Lula M. (Fulps) Brown. Eugene served in World War II as a paratrooper for... View Obituary & Service Information

The family of Eugene R. Brown created this Life Tributes page to make it easy to share your memories.

Eugene R. Brown, 93, of Bedford, passed away at his residence...