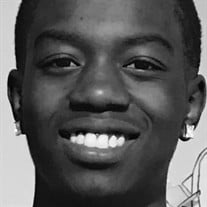 Evan Francis Brown, 17, of Heltonville, passed away on Tuesday, October 29, 2019. Born March 26, 2002, in Haiti, he was the son of Charles and Lisa (Halter) Brown. He had attended Bedford-North Lawrence High School. Evan loved playing softball and fishing. He also enjoyed spending time with his family and his girlfriend Alivia. Surviving are his parents; siblings, Jarren (Penny) Brown, of Brownstown, Shaylene Brown, Elli Brown, and Emily Brown, all of Heltonville; maternal grandfather, Francis Halter, of Vincennes; paternal aunts and uncles, Dorene (Tony) Smith, of Heltonville, Ed (Deb) Brown, Bedford, and maternal aunts and uncles Jamie (Bill) Kroeger, of Vincennes, and Leon (Robin) Halter, of Evansville; nieces and nephews, Hadley, Benson, and Elijah Brown, and Jaxtyn and Liam Flach; girlfriend, Alivia Eads; and several cousins. He was preceded in death by his paternal grandparents, Elvis and Doris Brown; maternal grandmother, Judy Halter; and uncle, Steve Brown. Funeral services will be at 4:00 P.M. on Sunday, November 3, 2019 at the Ferguson-Lee Chapel of Thorne-George Family Funeral Homes with Clarence Brown officiating. Private family burial will be at a later date. Visitation will be from 1-4 P.M. on Sunday at the funeral chapel. Memorial contributions may be made to the Ferguson-Lee Chapel at www.fergusonlee.com/payments-and-donations/ to assist the family with funeral expenses. Online condolences may be sent to the family at www.fergusonlee.com.

The family of Evan Francis Brown created this Life Tributes page to make it easy to share your memories.

Evan Francis Brown, 17, of Heltonville, passed away on Tuesday,...