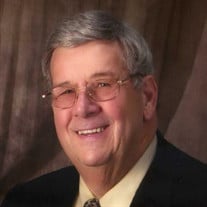 Flay E. Louden November 26, 1937 - April 19, 2020 Flay E. Louden, 82, of Bedford passed away on Sunday, April 19, 2020. Born November 26, 1937 in Bedford, the son of Herman R. and Amy (Lutes) Louden. He graduated from Shawswick High School in 1956. He married Nancy Boyd on July 12, 1959 and she survives. He was employed as a salesman for Louden Produce and in 1970, partnered with his brother to form TLC Inc. He served as manager of this institutional food service through 1988. He then became a Realtor in Lawrence County. He worked for Century 21 and Keach and Grove agencies. He served as President of the County Board of Realtors for two terms. He retired from Keach and Grove in 2006. He was a member of Central Church of Christ and served as a deacon for 20 years. He also served on the Spring Mill Bible Camp board for many years. He served on the Bedford City Council 1980-1984. He served as President on the Zoning Appeals Board. He was the first President of Bedford Revitalization. Survivors include his wife, Nancy of Bedford; son, Brian (Vicki) Louden of Houston, TX; daughter, Nila (John) Langlois of Hilliard, OH; grandchildren, Flay Patrick (Shelby) Louden of Dallas, TX, Parker Louden of Houston, TX, Peyton Louden of Dallas, TX, Nicole Langlois of Hilliard, OH and Justin Langlois of Hilliard, OH; and a great-grandson, Lucas Louden. He was preceded in death by his parents; brothers, Walter and Wayne Louden; three sisters, Norma Jeffries, Juanita Owens and Betty Sheetz. A private family service will be held on Wednesday, April 22, 2020 with Stephen Boyd officiating. Burial will be at Green Hill Cemetery. Memorial contributions may be made to Central Church of Christ in memory of Flay. Online condolences may be sent to the family at www.fergusonlee.com. Arrangements are under the direction of Ferguson-Lee Chapel of Thorne-George Family Funeral Homes.

The family of Flay E. Louden created this Life Tributes page to make it easy to share your memories.

Send flowers to the Louden family.