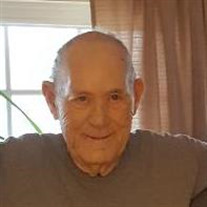 Frank “Butch” Runyon, 76, of Bedford, passed away on Friday February 15, 2019 at his residence. Born September 15, 1942, in Bloomington, IN, he was the son of Edward and Mary (Jackson) Runyon. Butch was a retired brick mason. He was a member of the American Legion Gillen Post #33 and Oolitic VFW. Surviving are his two daughters, Penny (William) Grubbs, of Bedford, and Sandra (Dennis) Hamm, of Bedford; six grandchildren, John, Michael, Ashley, William III (Nikki), Michael Shane (Angie), and Cassie; great-grandchildren, Colton, Jonathon, Caleb, Skylar, Payton, Lila, Levi, and Jamion; and several nieces and nephews. He was preceded in death by his parents; one son, David Runyon; one great-great grandson, Michael Charles Maxwell; one brother, Richard Runyon; and one sister, Delores Ann Kribbs. Funeral service will be at 11:30 A.M. on Thursday, February 21, 2019 at the Ferguson-Lee Chapel of Thorne-George Family Funeral Homes, with Bro. Robert Akers officiating. Burial will be in Gross Cemetery in Spencer. Visitation will be from 10:30 A.M. until the service hour on Thursday at the funeral chapel. Online condolences may be sent to the family at www.fergusonlee.com.

The family of Frank "Butch" Runyon created this Life Tributes page to make it easy to share your memories.

Frank “Butch” Runyon, 76, of Bedford, passed away on Friday February...

Send flowers to the Runyon family.