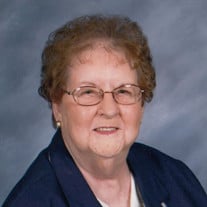 Geraldine "Gerry" (Salmon) Brown, 88, of Bedford, died at 9:20 p.m. on Saturday, November 2, 2019, at her residence surrounded by her family. Born July 22, 1931 in Martin County, Indiana, she was the daughter of Walter Salmon and Lola (Bolding) Salmon. She married James Evans in 1950, and later married Robert W. Brown, Sr. in 1982; both preceded her in death. She was a graduate of Shawswick High School Class of 1949. She retired from Bedford Medical Center as a switchboard operator. She was a member of the Southland Church of Christ, member of NARFE, and former member of Red Hat Society. Gerry loved spending time with her family. Surviving are daughter, Janie Hunter of Heltonville, and son, Jeff (Terri) Evans of Williams; two stepsons, Bob Brown of Mitchell and Les Brown of Springs Valley; one stepdaughter, Sharon (Terry) Koppelman of Warba, Minnesota; five grandchildren, Brad (Carol) Cummings, Jamie (Lori) Cummings, Matt (Becky) Cummings, Amber (Jason) Chinn, all of Bedford, and Brandi Evans of Springville; 22 great-grandchildren; two great-great grandchildren; several step grandchildren and step great-grandchildren; one sister, Evelyn Pridemore of Bedford as well as several nieces and nephews. In addition are, Eugene and Peggy Brewer and their families who have been a lifelong extension of our family. She was preceded in death by her parents, both husbands, three brothers, Freddie, David and John Salmon, and one sister, Phyllis Robbins. Funeral service will be on Thursday, November 7, 2019, at 1:00 p.m. at Ferguson-Lee Chapel of Thorne-George Family Funeral Homes, with Pastor Bud Smith officiating. Burial will be in Cresthaven Memory Gardens. Friends may call on Thursday, from 12:00 noon until service time at 1:00 p.m. at the funeral home. Memorial contributions may be made to the Southland Church of Christ. Online condolences may be sent to the family at www.fergusonlee.com.

Geraldine "Gerry" (Salmon) Brown, 88, of Bedford, died at 9:20 p.m. on Saturday, November 2, 2019, at her residence surrounded by her family. Born July 22, 1931 in Martin County, Indiana, she was the daughter of Walter Salmon and Lola (Bolding)... View Obituary & Service Information

The family of Geraldine "Gerry" (Salmon) Brown created this Life Tributes page to make it easy to share your memories.