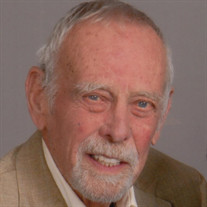 Halfdan E. Pedersen, Jr., 87, of Bedford, passed away on Wednesday, Nov. 4, 2020. Born April 7, 1933 in Milwaukee, Wisconsin, he was the son of Halfdan and Geneva (Mander) Pedersen, Sr. Halfdan (Haldie) enjoyed 57 years of marriage with Mary Elizabeth Gottsche who survives along with their three children: Elizabeth Swinney of Richmond, Indiana, Andrew (Erica) Pedersen of Fishers, Indiana and Chris (Angela) Pedersen of Springville, Indiana. Haldie had nine grandchildren that he loved dearly and spent a great deal of time with: Ellie, Molly, Gavin, A.J., Gabe, Sara, Caroline, Livian and Allison. Their events, ballgames and birthdays were priority level occasions. Haldie came from a large family and was preceded in death by his parents; two of his sisters, Terry Hunter and Susan Griffith; his brother, William Pedersen; and two brothers-in-law, Joe Hunter and Ed Lyons. Haldie’s “baby sister” Geneva, of Lenoir City, Tennessee; sister-in-law Susan Pedersen of Brookfield, Wisconsin; and brother-in-law, Bill Griffith of Menasha, Wisconsin all survive. Uncle Haldie was a true and complete living legend to his 24 nieces and nephews! Haldie graduated from St. Norbert Preparatory Seminary in De Pere, Wisconsin and attended Marquette and Indiana Universities. He was a Drill Sergeant in the U.S. Army during the Korean War and a proud member of the Gillen Post 33 of the American Legion. Haldie was a retired iron worker (Local Union #70); was a member of the Bedford Boat and Sportsman’s Club; and a former member of the Elks Club. Haldie was a graduate of St. Vincent de Paul Catholic School, a devoted St. Vincent de Paul parishioner, and a member of the Knights of Columbus. Haldie never traveled without his church clothes. St. Vincents held a special place in his heart. The family has asked that all memorial contributions be made to St. Vincent de Paul Catholic School. A memorial service is being planned for the 2021 Kentucky Derby weekend as that was a special time of year for Haldie. The Ferguson-Lee Chapel of Thorne-George Family Funeral Homes in Bedford has been entrusted with the care and arrangements for Halfdan E. Pedersen, Jr. Online condolences may be sent to the family at www.FergusonLee.com.

The family of Halfdan "Haldie" Pedersen Jr. created this Life Tributes page to make it easy to share your memories.

Send flowers to the Pedersen family.