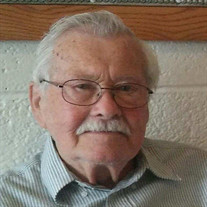 Harry C. Ramsay, 92, went to be with Jesus on April 22, 2019 at the Hospice House in Bloomington, Indiana. He was born and raised in Bartlettsville, IN. His parents were Earl and Lena (Kinser) Ramsay. He was born July 7, 1926. Harry married Avis Neal on July 7, 1948; they had 70 wonderful years together; and she survives. They had five children by birth and one adopted son, who all loved him dearly, Susan (Dennis) Tedrow, of Bedford, Shirley (Bob) Hamilton, of Salem, Debra Ramsay, of Bloomington, Tim (Lisa) Ramsay, of Bedford, Lawanna (Byron) Morris, of Campbellsburg, and Bob (Deidra) Marsh, of Bedford. He had twelve grandchildren; eight great-grandchildren; and several beloved nieces and nephews. Harry grew up in Bartlettsville, where his family farmed and ran the general store for many years. He had five siblings, Mabel Axsom, Hazel Norman, Josephine “Jo” Southern and a sister Ruth Anne in infancy that all preceded him in death. He is survived by his only brother, Jim Ramsay, of Pekin, IN. Harry was a veteran of WWII serving in the Navy. He worked at C&B Electric, in Bedford, as a service repairman, and in later years, he was a custodian at the Bedford Junior High School. He was a long time member of the Bedford Free Methodist Church. In the 1950’s he helped film and portrayed a beggar in the church’s film of “The Last Supper.” He also maintained a “Prayer Cabin” in his woods where many men from church would come to pray. He was a precious life-long prayer warrior. He loved his Lord, his family, his country, camping, and being out in God’s creation. In the past, he loved traveling in the semi with his good friend, Luke Medley, and more recently with his grandson, Asa. Harry was a simple man and always paused to enjoy the sunset. On Tuesday evening, he got to enjoy his first sunset in heaven. He was greatly loved and will be sorely missed. Funeral service will be at 11:00 A.M. on Friday, April 26, 2019 at Free Methodist Church, Bedford, with Pastor Ronnie McClain officiating. Burial will follow in Green Hill Cemetery. Visitation will be from 4-8 P.M. on Thursday at the Free Methodist Church. Arrangements are under the direction of the Ferguson-Lee Chapel of Thorne-George Family Funeral Homes. Online condolences may be sent to the family at www.fergusonlee.com.

Harry C. Ramsay, 92, went to be with Jesus on April 22, 2019 at the Hospice House in Bloomington, Indiana. He was born and raised in Bartlettsville, IN. His parents were Earl and Lena (Kinser) Ramsay. He was born July 7, 1926. Harry married... View Obituary & Service Information

The family of Harry C. Ramsay created this Life Tributes page to make it easy to share your memories.

Send flowers to the Ramsay family.