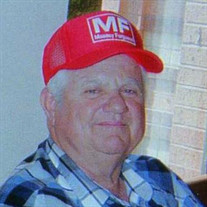 Henry Russell “Hank” Mathews November 8, 1944 - December 16, 2019 Henry “Hank” Mathews, 75, of Huron, passed away on Sunday, December 16, 2019 at IU Health Bloomington Hospital. Born November 8, 1944 in Bedford, he was the son of Russell B. and Ethela Gail (Fields) Mathews. He married Sharon Dumond on May 27, 2000 and she survives. He was a graduate of Shawswick High School class of 1963. Hank was a member of Operators Local Union #841 and was a mechanic. He was a U.S. Army Veteran and was a member of American Legion Gillen Post #33. He was the prior owner of Mathews Equipment Sales and was also a farmer. Surviving are his wife, Sharon Mathews of Huron; four sons, Travis Mathews of Bedford, Troy (Mandy) Mathews of Fayetteville, Ty (Kara) Mathews of Bedford and Chris Mathews of Florida; three stepchildren, Tracy Winkler of Mitchell, Tricia Hodges of Mitchell and Trent (Sandra) Mundy of Iowa; twelve grandchildren; three great-grandchildren; one brother, John F. (Martha) Mathews of Norman; two sisters, Ann Walden of Brazil and Ada Helen Terry of Tennessee; as well as several nieces and nephews. He was preceded in death by his parents; one brother, Will W. Mathews; sister-in-law E. Sue Mathews; brothers-in-law, Gordon Terry and Les Walden. Funeral service will be at 11:00 A.M. on Friday, December 20, 2019 at the Ferguson-Lee Chapel of Thorne-George Family Funeral Homes with Jeff Williams and Rev. Richard Tallman officiating. Burial will follow in Leatherwood Cemetery. Visitation will be from 3 - 8 P.M. on Thursday, December 19, 2019 at the funeral home. In lieu of flowers, memorial contributions may be made to Becky’s Place. Online condolences may be sent to the family at www.fergusonlee.com.

The family of Henry Russell "Hank" Mathews created this Life Tributes page to make it easy to share your memories.

Send flowers to the Mathews family.