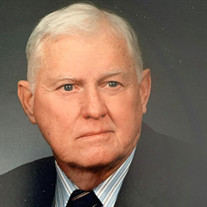 Homer Everett "Jay" Walton, Jr. Jay went to heaven on the evening of February 11th, 2021, in his home surrounded by his family. Born April 11, 1925 in Indianapolis, IN, he was the son of Homer E. Walton, Sr. and Mable (Chambers) Walton. He married his childhood sweetheart Maralou Watson Walton on April 11, 1948, and they enjoyed 72 loving years together. He retired from U.S. Naval Avionics Center on April 11, 1980 as the Superintendent of Public Works. He began employment April 1948 after serving six years in the Navy during World War II. He was discharged as a Chief Petty Officer, recalled in 1950 for the Korean Conflict, and served two more years returning to work at the Center. He spent a total of 35 years with the Navy. Survivors include his wife, Maralou; two sons, Larry J. Walton (Debbie) of Bedford and J. Travis Walton of Bedford; four grandchildren, Carly L. Walton of Owensboro, KY, Cody L. Walton (Sara) of Bloomington, IN, Kelsey G. Walton of Nashville, TN, and Garrett L. Walton of Bedford, IN; 2 great-grandchildren Mason and Emmett; two sisters, Juanita Parish and Marjorie Miller, both of Indianapolis, IN; special niece and nephew, Rebecca and Roy Hillenburg of Friendswood, TX and many other nieces, nephews and cousins. After retirement he continued with his vision and love by purchasing land to farm, raise grain and hay, and cattle for the purpose of leaving a legacy for his children, grandchildren and great-grandchildren. Jay graduated from Needmore High School in 1943 and awarded with the Ray W. Fry Outstanding Alumni Award in 2014. He was past President of the Lawrence County Beef Cattle Association, past State President of the Indiana Beef Cattle Association, and a member of the National Beef Cattle Association Board of Directors. He belonged to the Elks Club, American Legion Post #33, Masonic Lodge and Scottish Right of Indianapolis, IN (Brookside Lodge), IU Medical Center Foundation Board, and he was Supervisor for Lawrence County Soil and Water Conservation Board. He was preceded in death by his parents, two brothers Robert and Kenny, Brother-in-Law Russell E. Watson and Sister-in-Law Mildred (McPike) Watson. In lieu of flowers, the family would like donations made to the North Lawrence Community School Scholarship Foundation in remembrance of Jay. Visitation will be Tuesday, February 16th from 4pm to 8pm with services on Wednesday, February 17th at 11am. Visitation and services will be held at Ferguson-Lee Chapel of Thorne-George Family Funeral Homes in Bedford. Following the service, Jay will be laid to rest in Cresthaven Memory Gardens where Military Rites will be accorded by the Honor Guard of Gillen Post 33 of the American Legion. Online condolences may be sent to the family at www.FergusonLee.com.

Homer Everett "Jay" Walton, Jr. Jay went to heaven on the evening of February 11th, 2021, in his home surrounded by his family. Born April 11, 1925 in Indianapolis, IN, he was the son of Homer E. Walton, Sr. and Mable (Chambers) Walton. He... View Obituary & Service Information

The family of Homer "Jay" Walton Jr. created this Life Tributes page to make it easy to share your memories.

Send flowers to the Walton family.