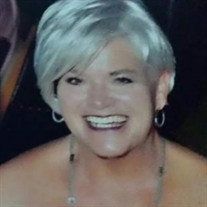 Jacqueline “Jacque” Rollins August 24, 1948 – March 28, 2019 Jacqueline “Jacque” Rollins, 70, of Bedford, passed away on Thursday, March 28, 2019 at her residence. Born August 24, 1948, in Indianapolis, Indiana, she was the daughter of Russell Shepperd and Juanita (Speer) Shepperd. She married James W. Rollins in 1969 and he preceded her in death in 2010. Jacque was a graduate of Heltonville High School Class of 1966; did a four year apprenticeship for die-making; and received an Associates Degree from Ivy Tech as an LPN. She attended Bartlettsville Christian Church and was a member of the Local UAW Union #440. She retired from General Motors after 30 years of Tool and Die Making. After retirement, Jacque worked as a diamontologist at Kay Jewelers and Macy’s and as an LPN at Dunn Memorial Hospital. Surviving are her two children, Jamie Rollins of Newberry, IN and Aden (Hilary) Rollins, of Louisiana; two sisters, Karen (Larry) Dalton and Gwen Norman, both of Bedford; step-mother, Sandy Shepperd, of Bedford; brother, Rusty Shepperd, of Bedford; step-sister, Deanna (Kevin) Stalder; several grandchildren; two great-grandchildren; and close friend, Mary Ann Todd and family. She was preceded in death by her parents; husband; step-brother, Donnie Perry; and step-sister, Kathy Perry. Funeral service will be at 11:00 A.M. on Monday, April 1, 2019 at the Ferguson-Lee Chapel of Thorne-George Family Funeral Homes, with Bro. Larry Dalton officiating. Burial will be in Fairview Cemetery. Visitation will be from 1-6 P.M. on Sunday at the funeral chapel. Memorial contributions may be made to White River Humane Society.

The family of Jacqueline Rollins created this Life Tributes page to make it easy to share your memories.

Send flowers to the Rollins family.