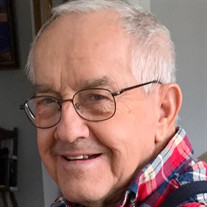 James Donald Bex October 1, 1937 - July 29, 2019 James Donald Bex, “Donnie”, 81, beloved husband of Dora Bex died on July 29, 2019. He was born on October 1, 1937 in Williams, Indiana, the son of Raymond and Anna Bex. In 1958 Donnie wed his longtime sweetheart, Dora Grissom. Donnie was an outdoor enthusiast, game hunter, avid gardener, and lifelong farmer. His idea of the perfect day was to be outdoors from sunup to sundown. In later years, his greatest joy was surveying the fruits of his labor from his front porch swing. He happily retired after 31 years with General Motors in 1993 leaving him many years to enjoy what he really loved. He was active in both the Williams and Oolitic Church of Christ where he served communion and read select scripture passages. Donnie leaves behind his wife Dora and his children; Julie Whitsett ( Joe ), of Indianapolis, Indiana, Janet Kresser ( Dave ), of Atlanta, Georgia, and Jane Bultman ( Bruce ), of Greenwood, Indiana, as well as his adored grandchildren; Tony, Anna, Elizabeth, Hannah, Jake and Robert, and great grandchildren; Simon, Estelle and Avery. He was preceded in death by his parents Raymond and Anna Bex and his sisters Colleen Hill and Barbara Short. A graveside service will be held on July 31 at 10:30 a.m. at the Green Hill Cemetery in Bedford. Arrangements are under the direction of the Ferguson-Lee Chapel of Thorne-George Family Funeral Homes. In lieu of ﬂowers, memorial donations may be made to the American Diabetes Association at Diabetes.org or 1 - 800 Diabetes.

The family of James Donald Bex created this Life Tributes page to make it easy to share your memories.

Send flowers to the Bex family.