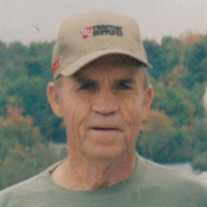 James “Russell” Holt, 78, of Springville, passed away Thursday, January 14, 2021 at IU Health Bloomington Hospital. Born April 19, 1942in Lawrence County, he was the son of Leo Thomas Holt and Celia May (Covey) Holt. He married Jay Robbins on October 15, 1966, and she survives. Russell was a concrete finisher and a member of Union Local 741, a member of the Judah Church of Christ and loved gardening, hunting and fishing, hunting mushrooms and spending time with all of his grandchildren. Surviving Russell in addition to his wife Jay is a daughter, Trena (Gordon) George; a son, John Phillip Holt; two grandchildren, Natasha (Ben) Baker and Jessica George; seven great grandchildren, Emmalee, Aubrey, Jaythan, Ava, Reed, Bryleigh, and Hadley; one great-great grandson, Jakoby; one brother, Robert “Bob” (Elaine) Holt; two sisters, Dixie (Edward) Moore and Linda (John) Davis; sister-in-law, Ann Holt; and several nieces and nephews. Preceding Russell in death were his parents; one granddaughter, Rasheal George; and two brothers, Anthony Dale Holt and Frank Holt. A private visitation and funeral service will be held at the Ferguson-Lee Chapel of Thorne-George Family Funeral Homes in Bedford with burial in Judah Cemetery. Online condolences may be sent to the family at www.FergusonLee.com. Ferguson-Lee Chapel of Thorne-George Family Funeral Homes has been entrusted with the care of and arrangements for Mr. Holt. Memorial contributions may be made to the Judah Cemetery.

The family of James "Russell" Holt created this Life Tributes page to make it easy to share your memories.

Send flowers to the Holt family.