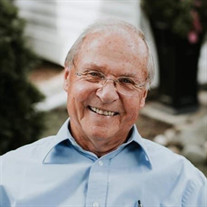 Dr. James (Jim) Kirkman Wilhite (Optometrist) was born July 22, 1939. He ascended into heaven on June 11, 2020. Jim is survived by his loving wife Sue (Darcus), his older sister Joan (Wilhite) Stevens (husband Paul Dennis), from Illinois, His three daughters; Jennifer Goldstein (husband David) of Michigan, Jill Hall (husband Brian) of Indianapolis, Julia Tummers (husband Randy) of Mitchell. Jim was blessed with many grandchildren and great grandchildren; Hannah Goldstein Gabizon,(husband Michael) Olivia Goldstein DeVreugd (husband Chris), Caroline Hall, Kelsey Hall (Husband David Meany), Jacqueline Ford (husband Daniel Drebenstedt), James Ford, Mike Tummers, Josh Tummers (wife Katie), Austin Tummers, Lindsey- Kate, Jackson, Anderson, Harrison, Jeremy, Jesse, Noam, Briella, Vincent, Alyssa, Ayden, Addison, Brianna as well as many loved nieces, nephews and cousins. He was preceded in death by his parents “Jerry” and Judy Wilhite and many aunts, uncles, and cousins. Jim was born in Bedford, Indiana to Dr. Ernest Gerald Wilhite, Optometrist, and Judith Maxine (Kirkman) Wilhite. He grew up in Bedford and graduated from Bedford High School. He met his lifelong love and soulmate in his senior year of high school. After graduating he attended school at the Indiana University School of Optometry where he graduated in 1961. He was a member of the Phi Gamma Delta chapter at Indiana University. Jim and Sue were married on September 9, 1961 in Bedford at the First United Methodist Church. After he graduated from the School of Optometry, he joined the military and served as an optometrist during the Vietnam War. He never served in Vietnam but readied the troops with his expertise in vision care. He and Sue were first stationed in San Antonio, Texas for basic training with their newborn daughter, Jennifer, then moved to Fort Gordon, Georgia where they had their second daughter, Jill. When Jim finished his service in 1965, they moved back to Bedford. Through divine intervention, Jim had the opportunity to purchase back his father’s optometry practice that was previously sold to Dr. James Eudaly, when Jim‘s father passed away in 1956. It was a gift for Jim to continue his dad’s practice for an additional 55 years where he had extremely dedicated employees. He found complete joy in serving others and truly loved his profession. In 1969 he and Sue moved into their forever home and were blessed with their third daughter, Julia. Jim has been a devoted Member of the First United Methodist Church in Bedford from the time they returned from Georgia. The FUMC was very important to him, as it was his childhood church where he remained a dedicated member to the end. He served on the board, many committees, sang in the choir and was a youth chaperone/bus driver for many adventurous ski trips to Michigan. Jim was a member of the local Elks Club, Power Squadron, a Mason, a member of the Stone Belt Optometric Society, past member of the Rotary Club (where he was honored with outstanding man of the year), a 49 year member of the American Legion Gillen Post 33 and also served one term as City Councilman. Jim had a love for music and was a member of the Residue (Jazz band) for 51 years where he developed friendships that became like family. He played the banjo, ukulele, saxophone, and was most known for playing the clarinet. He had basic knowledge of music as a result of childhood piano lessons and from that came his determination and desire to be self-taught on all the additional instruments. He had a beautiful tenor voice and was mentored by Carol Voris to develop this talent. He sang several solos with the Residue, UMFC, the Cantata at the First Baptist Church, many community concerts, as well as Little Theatre productions. Other than his sincere love for family, church and community, his favorite pastimes were golfing, boating, snow skiing and attending IU games where he cultivated many of his lifelong friendships! Jim built a firm foundation for his family. He was strong in his faith and brought his family up in the way God intended through his Christian values and led by example. He was a loving husband, father, brother, uncle, and a devoted friend to many. He lived by the fruits of the Spirit! Sue once asked what his criteria for good living was, he quickly answered: “#1 Love your God with all your heart and give Him thanks and praise for all we have, study his word, and serve him. #2 Be kind. #3 Be unselfish. #4 Be trustworthy, Don’t lie, cheat or steal. #5 Work hard and be the very best you can be.” Jim Supported his Republican party for their conservative values, supported President Trump’s policies and loved his country. If you asked, he would say “get out there and vote for President Trump.” There will be a private funeral service for his family on Monday with burial to follow at Green Hill Cemetery. For the community, there will be a casual public celebration of life at the Thornton Park Pavilion from 5 PM to 7 PM on Monday, June 15th, 2020. In respect for everyone’s safety, the family requests that masks please be worn. In lieu of flowers, memorial contributions can be made to the Bedford First United Methodist Church or The White River Humane Society either directly or through Ferguson-Lee Chapel of Thorne-George Family Funeral Homes. Online condolences may be sent to the family www.fergusonlee.com. Ferguson-Lee Chapel of Thorne-George Family Funeral Homes has been entrusted with the arrangement for Dr. Wilhite.

The family of Dr. James "Jim" Kirkman Wilhite created this Life Tributes page to make it easy to share your memories.

Send flowers to the Wilhite family.