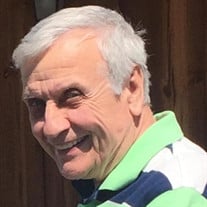 James K. “Jim” Standish, 84, of Bedford, passed away on Friday, December 17, 2021 at Indiana University Health Hospice House in Bloomington. Born December 31, 1936 in Lawrence County, he was the son of Orville Standish and Doris (Nicholson) Standish. He married Sue Flinn on March 9, 1957 and she survives. Jim was a graduate of Shawswick High School and Purdue University. He was a member of Pinhook Church of Christ where he had served as an Elder. He was the founder of Standish Steel, Inc. and was an engineer. Jim enjoyed farming and loved spending time with his children and grandchildren. Surviving to cherish the memory of Jim are his wife, Sue; three daughters, Terra (Jimmy) Shaff, Debbie (Bobby) Brown, and Laura (Mike) Waggoner; six grandchildren, Mandy Shaff, Jared Shaff, Kayla (Craig) Matern, Ryan Brown, Lacy (Zach) Bailiff, Laken (Jacek) Zapendowski,; three great grandchildren, Bria Matern, Lola Bailiff and Zoey Bailiff; one brother, Gene (Martha) Standish; and six nieces. Jim was preceded in death by his parents. Funeral services will be held on Thursday, December 23, 2021 at 1:00pm at the Pinhook Church of Christ with Bro. Paul Guthrie officiating. Burial will follow in the Pinhook Cemetery. Visitation will also be Thursday from 10:00am-1:00pm at the Pinhook Church of Christ. Services for James K. “Jim” Standish have been entrusted to the Ferguson-Lee Chapel of Thorne-George Family Funeral Homes. Online condolences may be sent to the family at www.FergusonLee.com.

The family of James K. Standish created this Life Tributes page to make it easy to share your memories.

Send flowers to the Standish family.