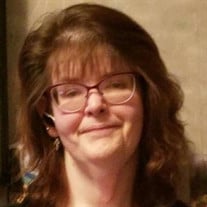 Jennifer Suzanne (Cain) White, 43, of Solsberry, passed away Friday, February 7, 2020 at Franciscan Health Hospital in Indianapolis. Born December 3, 1976 in Bedford, she was the daughter of Clyde and Ruth Ann (Sullivan) Cain. She married John Teige White on December 14, 2002 and he preceded her in death on November 12, 2019. Jennifer was an Eastern Greene High School graduate Class of 1994 and had her business degree from Ivy Tech Community College. She worked as an office assistant at Cook Medical and a member at Salvation Army Church in Bedford. Surviving are her father, Clyde (Bonnie) Cain; three brothers, Michael J. Watson, David P. Watson Jr., Samuel Terrell; one sister, Jennifer Terrell; aunts, Helen Good, Carolyn Browning, Clara Sturgis; uncles, Curtis Cain, Joe Sullivan; several nieces, nephews and cousins; as well as her beloved dogs, Bear, Bella, Duke, Harley and Ranger. She was preceded in death by her mother, Ruth and her husband, John. Funeral service will be at 3:00 P.M. on Monday, February 17, 2020 at the Ferguson-Lee Chapel of Thorne-George Family Funeral Homes with Capt. Donna Rose officiating. Visitation will be from 1 P.M. until the service hour on Monday, February 17, 2020 at Ferguson-Lee Chapel. In lieu of flowers, memorial contributions may be made to White River Humane Society in memory of Jennifer. Online condolences may be sent to the family at www.fergusonlee.com

The family of Jennifer Suzanne White created this Life Tributes page to make it easy to share your memories.

Send flowers to the White family.