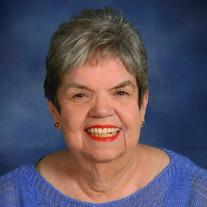 Jesse Lou Day May 17, 1939 – July 23, 2018 Jesse Lou (Reilly) Day passed away at Stonebridge Health Campus on July 23, 2018. She was born May 17, 1939 in Bedford, Indiana to Howard T. and Anna Brown Reilly. She married John F. Day. She is survived by a stepdaughter, Storme Day, of Bedford and cousins, Jan E. (Mary Lea) Brown, Stephen L. Brown, and Jesse Brown, of Orleans. Her step-grandchildren are Phillip E. (Renee) Stackhouse, San Diego, CA, Tami K. (Todd) Schnatzmeyer, of Bloomington, and Jeremy S. (Donita) Day, of Las Vegas, NV. She is also survived by three step-great-granddaughters and four step-great-grandsons. Her parents, husband, and a stepdaughter preceded her in death. Jesse was a member and elder of the First Presbyterian Church, a board member and former president of the Bedford North Lawrence Scholarship Foundation, Indiana Landmarks serving as a docent at the West Baden Springs Hotel, and a member of Bedford Panhellenic. She also had served as president of the North Lawrence Education Association and Delta Pi Epsilon, Theta Chapter at Indiana University. She was a Bedford High School graduate and received a B.S. in Business and an M.S. in Education from Indiana University. She was employed as a teacher for 40 years with the North Lawrence Community Schools at the old Needmore High School, North Lawrence Career Center, and Bedford North Lawrence High School. There will be no calling; graveside services will be conducted at Livonia Cemetery, Livonia, Indiana (Washington County) at 1:00 P.M. on Wednesday, July 25, 2018. The Ferguson-Lee Chapel of Thorne-George Family Funeral Homes is entrusted with arrangements. Please consider First Presbyterian Church Congregational Care Fund and Bedford North Lawrence Scholarship Foundation for memorials. Online condolences may be sent to the family at www.fergusonlee.com.

The family of Jesse Lou Day created this Life Tributes page to make it easy to share your memories.

Send flowers to the Day family.