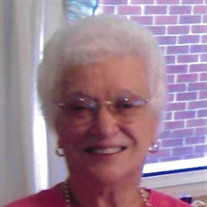 Jewell M. Storms, 103, of Bedford, passed away Wednesday, January 12, 2022, at Stone Bridge Health Campus, Bedford. She was born March 22, 1918, in Orange County, Indiana, to Noble and Minnie (Tolbert) Felknor. She married Herman Michael Storms on October 3, 1936, and he preceded her in death on June 20, 2003. Jewell attended Bedford High School and was a homemaker. She was an avid bowler for almost 50 years and later belonged to Broadview Senior League, Club #55. She was a member of Grace United Methodist Church and United Methodist Women. She loved sports, especially the Pacers, I. U. and the Colts. She enjoyed cooking, reading her Bible, crocheting and crossword puzzles. She was one of a kind. Surviving Jewell is her daughter, Beverly (Kenneth) Ikerd of Bedford; grandchildren, John (Kelly) Storms, Kenneth (Donna) Ikerd II, both of Bedford, Lisa (Greg) Conner of Sevierville, Tennessee and Mark Storms of Vincennes; eight great grandchildren; and six great great grandchildren. Preceding Jewell in death were her parents; husband; a son, Michael M. Storms; one great grandchild; five sisters; and one brother. Funeral services for Jewell will be at 1:00 p.m., Monday, January 17, 2022, at the Ferguson-Lee Chapel of Thorne-George Family Funeral Homes in Bedford with Pastor Phil Stroud and Mark Duncan officiating. Burial will follow in Clover Hill Cemetery in Harrodsburg. Visitation will begin at 11:00 a.m., Monday, and continue until the service hour, also at Ferguson-Lee. Memorial contributions may be made to Grace United Methodist Church. The family wishes to thank the Stone Bridge Residential staff for such loving care and compassion for her. Online condolences to the family may be sent to www.FergusonLee.com.

The family of Jewell M. Storms created this Life Tributes page to make it easy to share your memories.

Send flowers to the Storms family.