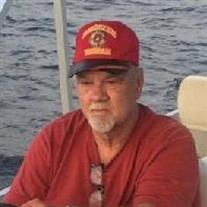 Kenneth F. “Ken” Clark, 70, of Argos, Indiana, passed away Friday, February 7, 2020 at his residence. Born February 15, 1949 in Indianapolis, he was the son of Elmer and Bessie (Wilson) Clark. He married Joan Miller on October 17, 1987 and she survives. Ken was a graduate of Kankakee College and a Vietnam Veteran of the United States Marine Corps. He also served in the Marines as a reserve as well as the National Guard. Ken was the former President of the Steel Workers Union at Lear Corporation, a truck driver and a substitute teacher. Ken enjoyed bass fishing, golfing, Ohio State Football and spending time with his family. Surviving are his wife, Joan Clark of Argos; six children, Jeremy (Clarrisa) Clark of Ohio, Shane Clark of Ohio , Gregory Prosser of Louisiana, Christine (Kevin) Crecelius of Mitchell, Russell Prosser Jr. of Bunker Hill; niece, Stephanie (Cody) Thompson who lived with Ken and Joanne for several years; twenty grandchildren, fourteen great-grandchildren and one expected; seven siblings, Michael Clark of Kentucky, Jack Clark of Kentucky, Elizabeth Johnson of Plymouth, Charles Clark of Florida, Kirk (Patricia) Clark of Plymouth, James (Julia) Clark of Kentucky, Sheila Dixon of Plymouth; as well as several nieces and nephews. He was preceded in death by his parents and one son, Kenneth F. Clark II. The family has chosen cremation with a Celebration of Life in Argos, Indiana at a later date. Burial will be at Maple Grove Cemetery in Argos, Indiana at a later date as well. Arrangements are under the direction of Ferguson-Lee Chapel of Thorne-George Family Funeral Homes in Bedford, Indiana. Online condolences may be sent to the family at www.fergusonlee.com.

The family of Kenneth F. "Ken" Clark created this Life Tributes page to make it easy to share your memories.

Send flowers to the Clark family.