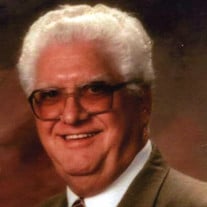 Kenneth “Ed” Clark, 88, of Bedford, passed away on December 31, 2018 at 11:40 AM at White River Lodge. Born October 22, 1930 in Bedford, Indiana he was the son of Gerald and Helen (Davis) Clark. He married Betty Curren on September 29, 1950 and she preceded him in death in June of 2006. Ed retired from General Motors in 1985 where he worked as a die cast machine operator. He served in the National Guard and was a member of American Legion Gillen Post #33. Surviving are one son, Kenneth L. (Patty) Clark, of Bedford; four grandchildren, Kurt Clark, of Bedford, Keith Clark, of Colorado, Lisa (Chris) Banyots, of Ohio, and Shawn Evans, of Ohio; five great grandchildren, Kyra Clark, Kary Clark, Kennedy Clark, Sydney Clark, and Julius Banyots; two sisters, Janice Westbrook, of Texas, and Louella Cagle, of Bedford; one brother, Richard Clark, of Columbus. He was preceded in death by his parents; wife, Betty Clark; daughter, Kathy Evans and a brother, Leroy Clark. Funeral service will be at 11:00 A.M. on Saturday, January 5, 2019, at the Ferguson-Lee Chapel of Thorne-George Family Funeral Homes, with Pastor Kenny Walden officiating. Burial will be in Cresthaven Memory Gardens. Visitation will be 4-8 P.M. on Friday at the funeral chapel.

The family of Kenneth "Ed" Clark created this Life Tributes page to make it easy to share your memories.

Send flowers to the Clark family.