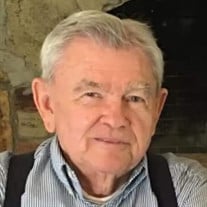 Lawrence Lee “Monk” Dwyer, 87, long time resident of Bedford and formerly of 2435 I Street, passed away Wednesday morning at the Bliss Place. Born March 31, 1934 to Arthur “Pat” and Josephine (Hill) Dwyer in Indian Springs. Monk graduated from Williams High School with the class of 1952 and later joined the U.S. Army. He married Connie Lee Baldwin on August 11, 1956 in Mitchell. Connie preceded him in death on January 10, 2005. Monk was best known as a firefighter for the City of Bedford Fire Department. He retired from the Fire Department but also worked at Otis Elevator in Bloomington and was a carpenter. Surviving to cherish Monk’s memory are his children, David and Kathy Dwyer of Columbus, IN, Mark Dwyer of New Hampshire, and Rachel Fields of Bedford; daughter in law, Becky Dwyer of Mitchell. Also surviving are his grandchildren, Michael and Melissa Dwyer of West Lafayette, IN, Matthew and Ashley Dwyer of Columbus, IN, Shannon Dwyer of Indianapolis, IN, Heather (Dwyer) and Eric Taylor of Bedford, James Dwyer of Columbus, IN, Elizabeth Dwyer of Columbus, IN, and Patrick Fields of Bedford; along with eight great granddaughters; a sister Claris Melvin of Bedford; and several nieces and nephews. Monk was preceded in death by his parents; his wife, Connie; and siblings Carl Sipes, Barbara Jean Dwyer, Tweedle McCann, and Patsy Coleman. Visitation for Monk will be from 4:00pm till 8:00 pm, Friday, August 20 at the Ferguson-Lee Chapel of Thorne-George Family Funeral Homes in Bedford. Funeral services will be held Saturday at 11:00 am at the Ferguson-Lee Chapel with burial to follow in the Spring Hill Cemetery, Shoals, IN. Online condolences may be sent to the family at www.FergusonLee.com.

The family of Lawrence "Monk" Dwyer created this Life Tributes page to make it easy to share your memories.

Send flowers to the Dwyer family.