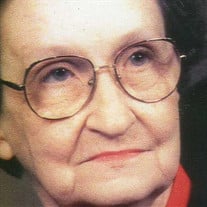 Lois Jane McFarland, 92, of Bedford passed away, Wednesday, February 12, 2020 at Garden Villa in Bedford. Born June 26, 1927 in Lawrence County, she was the daughter of John and Nina (Lamb) Chastain. She married Kenneth McFarland on May 9, 1945 and he preceded her in death on December 30, 2015. Lois attended Oolitic High School and Englewood Baptist Church. She was a homemaker and worked at the LARC Center where she was a founding member and a member of the board. Lois was a member of the Daughters of Rebekah and a prior board member of SICIL. Surviving are her daughter, Denise McFarland; eight grandchildren, Teresa Andis, Charles Garland Jr., Joseph Garland, Clayton (Angela) Garland, Kenneth Garland, Kaylee George, Cassidy Oliver, Aaron Hobbs; several great-grandchildren and great-great-grandchildren; one brother-in-law, Jill McFarland; one sister-in-law, Glenda Jarvis; daughter-in-law, Julie McFarland; as well as several nieces and nephews. She was preceded in death by her parents, husband; three children, Johnny McFarland, Jennifer Cady, Zachary McFarland; one grandson, JA Cady; one sister, Geraldine Walls; two brothers, Frank and Walter Chastain. Funeral services are at 11 A.M. on Monday, February 17, 2020 at Ferguson-Lee Chapel of Thorne-George Family Funeral Homes with Rev. George Payocong. Burial to follow in Williams Cemetery. Visitation will be from 9 A.M. until the hour of service on Monday at the funeral home. Memorial contributions may be to LARC, March of Dimes, or FOP – Shop with a Cop in memory of Lois. Online condolences may be sent to the family at www.fergusonlee.com

Lois Jane McFarland, 92, of Bedford passed away, Wednesday, February 12, 2020 at Garden Villa in Bedford. Born June 26, 1927 in Lawrence County, she was the daughter of John and Nina (Lamb) Chastain. She married Kenneth McFarland on May 9, 1945... View Obituary & Service Information

The family of Lois Jane McFarland created this Life Tributes page to make it easy to share your memories.

Send flowers to the McFarland family.