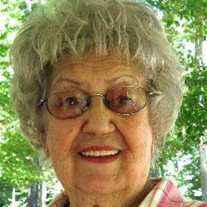 Born in the town of Tremont, Itawamba Co., Mississippi on October 11, 1922. She passed on to God Thanksgiving Day, November 28, 2019. She was 97 years old. After moving from California, she lived in Bedford, Indiana, on Kenray Lake for more than 20 years prior to moving into assisted living in October of 2017. Earlier in life, Lorrain worked 12 years as Nurses Aid at a Senior Care Facility in California, where she enjoyed caring for and helping elderly patients. She enjoyed gardening and took pride in her home on the lake. She always had pets around her and spoiled them to their joy AND HERS. Lorrain loved country music and danced as long as she could. In California, she and her husband were regulars at the now famous Palomino Club, where all the greats in country music were known to have played. Elvis Presley was one of her favorite singers along with Tammy Wynette, who was also born in the same little town as Lorrain, Tremont, Mississippi. She was a strong religious soul and prayed to God every able day of her life. Over the years as her son, I would hear from everyone who knew or met her say, “She's one of the kindest and sweetest people there is”. She is survived by her son Jerry Emmons of New Mexico; grandsons, Spencer Emmons of California and Marshall C. Fletcher of Bedford, Indiana. She was deeply appreciated and loved by the people who shared time with her and will be missed by all of the many nieces, nephews and friends. She is preceded in death by her husband, Kenneth James Emmons; daughter, Mrs. Jannice K. Fletcher; mother, Lydia Luella and father William Floyd Jarman; sisters; Mrs. Lara Wilma Baldwin, Mrs. Thelma Jewell Horton, Mrs. Edna Mae Ryan; brothers; Howard Billy Jarman, James “Bert” Jarman, Cecil Leroy Jarman, Otho Earl Jarman, Everett Jarman, and Floyd Lee “Sandy” Jarman. Her Jarman family can be traced to North West Wales, 1629. They immigrated to North Carolina sometime in the early 1600's. A memorial service for her is being planned for next spring at the Jarman Family Cemetery in Arkansas. Arrangement are under the direction of the Ferguson-Lee Chapel of Thorne-George Family Funeral Homes in Bedford, Indiana. Online condolences may be sent to the family at www.fergusonlee.com.

Born in the town of Tremont, Itawamba Co., Mississippi on October 11, 1922. She passed on to God Thanksgiving Day, November 28, 2019. She was 97 years old. After moving from California, she lived in Bedford, Indiana, on Kenray Lake for more... View Obituary & Service Information

The family of Mamie "Lorrain" Jarman Emmons created this Life Tributes page to make it easy to share your memories.

Born in the town of Tremont, Itawamba Co., Mississippi on October...

Send flowers to the Emmons family.