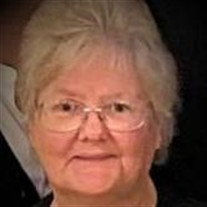 Marcia Ann (Buzzard) Lewis went home peacefully to be with her Lord and Savior December 19, 2021, at Jasper Memorial Hospital with family by her side. Marcia was born April 4, 1956, in Buffalo, New York. Her parents were Mary Ann (Gregiore) and Arnold Buzzard. Before moving to Shoals she worked as a nurse in Mooresville for Dr. Whitney. She married Martin Lewis on May 1, 1993. She worked at NWSC Crane, worked as an insurance agent, as a secretary for Bailey Bros. Used Cars in Shoals, and after retirement worked as an Amish Uber. Her greatest pleasure was being a wife, mother, and grandmother. She was a member of the Shoals United Methodist Church, the Study Club and Rusk Homemakers. She enjoyed playing cards, cooking, canning, and singing at nursing homes and churches in the area. She enjoyed crocheting afghans as much as she enjoyed giving them away. Marcia is survived by her husband, Martin; one son, Joshua Lewis of Loogootee; daughter, Hannah Lewis of Denver, Colorado; and granddaughter, Penelope Alice; her siblings, Jennifer (Vern) Hobbs, Lisa (Brad) Berry, Greg (Mary Lee) Buzzard and Gunner (Wendy) Buzzard. She is also survived by her mother-in-law, Hazel Lewis; sister in-law, Karen Lewis; brother in-law, Daniel (Alice) Lewis; brother in-law, Ernie (Jill) Lewis; sister in-law Marianne (Don) Burgan; sister in-law, Cyndy Carithers; sister in-law Melissa (Troy) Pride and many nieces and nephews. Marcia was preceded in death by her parents, father in-law, Leroy Lewis; brothers in-law David Lewis and Ed Carithers, and nephew, David Lewis Jr. A celebration of her life will be held 12:00 PM Thursday, December 23, 2021 at the Shoals United Methodist Church with burial in the Waggoner's Chapel Cemetery. Pastor Marty Evans will officiate. Visitation will be 10:00 AM until the time service at the church. Memorial contributions can be made to the Martin County Humane Society or your favorite charity. Marcia loved people and had a heart of gold. She will be greatly missed. The Queen-Lee Chapel of Thorne-George Family Funeral Homes has been entrusted with the arrangements.

Marcia Ann (Buzzard) Lewis went home peacefully to be with her Lord and Savior December 19, 2021, at Jasper Memorial Hospital with family by her side. Marcia was born April 4, 1956, in Buffalo, New York. Her parents were Mary Ann (Gregiore)... View Obituary & Service Information

The family of Marcia Ann Lewis created this Life Tributes page to make it easy to share your memories.

Marcia Ann (Buzzard) Lewis went home peacefully to be with her...

Send flowers to the Lewis family.