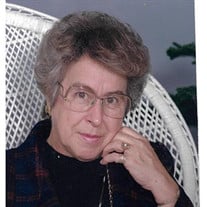 Marjorie Sue Leighty age 96, of Shoals, passed away at the Loogootee Nursing Center on Thursday, September 19, 2019. She was born July, 11, 1923 in Shoals to Ora Clyde and Emma (Dorsett) Terry. She was first married to William R. Jones then to Robert Sherfick and both preceded her in death. She later married Carl J. Leighty and he also preceded her in death. She was a 1941 Graduate of Shoals High School, attended Central Normal College in Danville along with her father, Butler University, and completed her Masters Degree at Indiana State University. “Sue” was a lifelong educator following her father’s footsteps along with three of her sisters. She enjoyed teaching Jr. High and High School Students primarily in English, PE and Business. During her career she taught in Orleans, Indianapolis, Mitchell and Shoals. She retired with thirty-two years of service. Following her retirement, she was a substitute teacher for many years. She taught three generations of Shoals families. She was a high school and college cheerleader and coached cheerleading later. She attended the Shoals Christian Church, was a member of the Retired Teachers of Martin and Daviess County, the American Legion Auxiliary, The Shoals Eagles, the V.F.W. Ladies Auxiliary, was a former member of the Huron Cemetery Association, the Martin County Historical Society, the Shoals Senior Citizens and was Grand Marshall of the 2005 Shoals Catfish Festival Parade. Survivors include, one daughter Cindi (Ted) Howlett of Speedway; one son, Joe (Karen) Sherfick of Ellettsville; one granddaughter, Abbie Sherfick; one grandson, A.J. Sherfick; one sister, Phyllis Sims of Indianapolis and several nieces, nephews and cousins. She is preceded in death by her parents and three sisters, Ruth Hess, Doris Kunkel and Vivian Small. Funeral services are 11:00 AM Wednesday, September 25, 2019 at the Shoals Christian Church with Pastor Matt Sullivan officiating. Burial will be in the Huron Cemetery. Visitation will be 4:00-8:00 PM Tuesday at the Queen-Lee Chapel in Shoals. The Queen-Lee Chapel of the Thorne-George Family Funeral Homes is in charge of the arrangements.

Marjorie Sue Leighty age 96, of Shoals, passed away at the Loogootee Nursing Center on Thursday, September 19, 2019. She was born July, 11, 1923 in Shoals to Ora Clyde and Emma (Dorsett) Terry. She was first married to William R. Jones then... View Obituary & Service Information

The family of Marjorie Sue Leighty created this Life Tributes page to make it easy to share your memories.

Marjorie Sue Leighty age 96, of Shoals, passed away at the Loogootee...

Send flowers to the Leighty family.