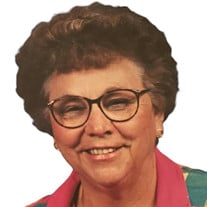 Mary Lou Anderson, 85, passed away on Monday April 4, at her residence. Born April 18, 1936 in Lafayette, Indiana, she was the daughter of Lavina and Jim Smith. She married Ralph Edward Anderson on June 19, 1953 and he survives. She worked with her husband for many years at Crowder’s Pharmacy after moving to Bedford in 1957. They purchased the pharmacy on Lincoln Ave and lived in the apartment upstairs with their two young sons. Mary delivered medications during the day with the two young boys. In the 1980’s they opened the Ben Franklin store downtown where she worked and became involved in the Downtown Merchants Association. She was also active in Bedford Revitalization, The Strawberry Shortcake Festival, Mums the Word and the Wiley House. She was a member of Calvary Lutheran Church and active with the Ladies Guild and Preschool. Survivors include her husband Ralph, of Bedford; five children, Dale Anderson, Mike Anderson, Carol (Fred) Harris, Steve Anderson and Ann Garrison all of Bedford. Eight grandchildren; Crystal Anderson of Key Largo, Fl, Brontee Anderson of Bloomington, Josh (Laura) Anderson of San Diego, CA, Jennifer (Justin) Inman, Sarah (Jason) Mathis of Bloomington, Brooke (Paul) Mosqueda, Whitney Jacks, Tony (Cynthia) Wray of Arizona. Thirteen great-grandchildren; Maverick, Connor and Colton Anderson, Tucker, Wesleigh, and Kutter Inman, Layla and Sawyer Mathis, Lily Mosqueda, Gabriel and Marceline Jacks, Jackson and Haley Wray. She was preceded in death by her parents, two sisters, two brothers and a daughter-in-law Missy Hall Anderson. Private family services will be conducted on Friday April 8th at Calvary Lutheran Church. In lieu of flowers the family asks that donations be made to Calvary Lutheran Preschool (3705 Austin Drive, Bedford, Indiana) with the Mary Anderson Scholarship in the memo.

Mary Lou Anderson, 85, passed away on Monday April 4, at her residence. Born April 18, 1936 in Lafayette, Indiana, she was the daughter of Lavina and Jim Smith. She married Ralph Edward Anderson on June 19, 1953 and he survives. She worked... View Obituary & Service Information

The family of Mary Lou Anderson created this Life Tributes page to make it easy to share your memories.

Send flowers to the Anderson family.