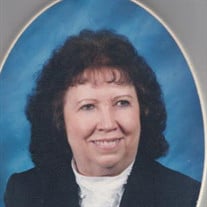 Nancy Rebecca Millikan, 83, of Bedford, passed away Sunday, February 21, 2021 in Bedford. She was born in Bedford on June 24, 1937 to Charlie and Ruth (Mundy) Wagoner. She married Wayne Millikan on February 10, 2007 and he survives. Nancy... View Obituary & Service Information

The family of Nancy Rebecca Millikan created this Life Tributes page to make it easy to share your memories.

Send flowers to the Millikan family.