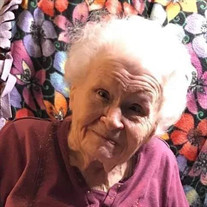 Oweeta Margaret (Pace) Flinn January 8, 1923 – January 15, 2020 Oweeta “Weetie” Flinn, 97, of Bloomington, passed away peacefully on Wednesday, January 15, 2020 at Monroe Place in Bloomington. Born January 8, 1923 in Leesville, Indiana, she was the daughter of Everett and Lorena (Keithly) Pace. She married Hurvey Earl “Ick” Flinn and he preceded her in death in May of 1955. She was the head seamstress for Indiana University Halls of Residence and she worked on the VT Project during WWII at RCA. She was a Tunnelton High School graduate. Oweeta enjoyed sewing, making doll clothes, and spending time with her family. Surviving are her two children, Connie Ducker and Steven Flinn both of Bloomington; daughter-in-law, Mary Jane (Tom) Flinn of Dubois; six grandchildren, Todd Flinn, Jamison Flinn, Mike Flinn, Andrea Harger, Tim Ducker, D. Scott Ducker; twelve great-grandchildren; two sisters, Betty Brown of Bedford and Bonnie Clifton of Needmore; as well as many nieces and nephews. She was preceded in death by her parents; husband; two sons, Ronald and Tom Flinn; and two sisters, Jean Horner and Helen Sovern. Funeral services will be at 1:00 P.M. on Monday, January 20, 2020 at Ferguson-Lee Chapel of Thorne-George Family Funeral Homes with Gary Lee officiating. Burial to follow at Beech Grove Cemetery. Visitation will be from 11:00 A.M. until the hour of service on Monday, January 20, 2020. In lieu of flowers, memorial contributions may be made to the Monroe or Lawrence County Humane Society. Online condolences may be sent to the family at www.fergusonlee.com

The family of Oweeta Margaret Flinn created this Life Tributes page to make it easy to share your memories.

Send flowers to the Flinn family.