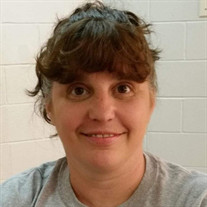 Pamela “Pam” Oldham March 1, 1967 - April 9, 2020 Pamela “Pam” Oldham, 53, of Oolitic, passed away Thursday, April 9, 2020 at Indiana University Hospital in Indianapolis. Born March 1, 1967 in Bloomington, she was the daughter of John and Patty (Carr) Moore. She married Michael Oldham on October 22, 1987 and he survives. Pam was a graduate of Bloomington South High School Class of 1985. She was of the Nazarene faith and a member of Bunco Club. Pam was the owner of Pam’s Sewing & Alterations in Bedford. She loved spending time with her family, especially her nieces and nephews along with BNL Marching Stars. Pam absolutely loved her cats, particularly Watson. Surviving are her husband, Michael; daughter, Mary Elizabeth (Alex) Mason; son, Tristen Oldham; step-brothers, Gary (Jan) Whaley, Scott Terrell, Kurt Shifflett, Chris Shifflett, Nick Shifflett; half-sister, Sherry Jones; one sister, Regina (Bruce) Kelly; one brother, Rocky (Kathy) Carr; step-mother, Mary Moore; step-sister, Dionne Shifflett; as well as several nieces, nephews, and cousins. She was preceded in death by her father, John; mother, Patty; and one sister, Rosanna Reid. A private family service will be held with Rev. Dick Henderson and Rev. Russell Elkins officiating. A celebration of life will be held at a later date. Burial will be at Valhalla Memory Gardens in Bloomington. Memorial contributions may be made to White River Humane Society in memory of Pam. Online condolences may be sent to the family at www.fergusonlee.com. Arrangements are under the direction of Ferguson-Lee Chapel of Thorne-George Family Funeral Homes.

The family of Pam Oldham created this Life Tributes page to make it easy to share your memories.

Send flowers to the Oldham family.