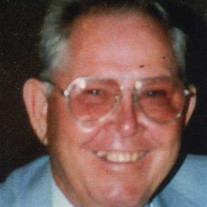 Robert Dale “Bob” Bunch November 29, 1923 – February 26, 2019 Robert Dale “Bob the Candy man” Bunch, 95, of Bedford, passed away on Tuesday, February 26, 2019 at Garden Villa, Bedford. Born November 29, 1923, in Bedford, he was the son of Elza and Sallie (Walters) Bunch. He married Barbara Hardin on October 19, 1946 and she survives. Bob was a graduate of Bedford High School Class of 1943. He was a decorated World War II US Navy Veteran, including a Bronze and Silver Star recipient. He was a member of First Christian Church, Bedford, where he served as a Deacon, Elder, and Sunday School Teacher. Bob enjoyed gardening and music. He retired as a mechanic from Allied Chemical in Metropolis, IL in 1979. Surviving are his wife, Barbara, of Bedford; two sons, David Dale Bunch and wife Claudine, of Baton Rouge, LA, and Ricky Lee Bunch and wife Teresa, of Hardin, KY; one daughter, Cheryl Byrd and husband Jerry, of Bedford; seven grandsons, Eric, Michael, Brad, and Daniel Byford, all of Bedford, David and Stephen Bunch, of Baton Rouge, LA, and Robert Lee Bunch, of Hardin, KY; thirteen great-grandchildren, Tiffany, Eric, Adam, Emily, Ashlyn, Mason, Hannah, Dawson, Elayna, Heston, Averie, Cole, and Luke; one great great-grandchild; and several nieces and nephews. He was preceded in death by his parents; one sister, Hattie Mae Cummings; and four brothers, Alvin, Jack, Charles, and James Bunch. Funeral service will be at 1:00 P.M. on Friday, March 1, 2019 at the Ferguson-Lee Chapel of Thorne-George Family Funeral Homes, with Rev. David B. Bunch and Pastor Bruce Ervin officiating. Burial will be in Cresthaven Memory Gardens. Military rites will be accorded by members of the American Legion Gillen Post #33. Visitation will be from 11:00 A.M. until the service hour on Friday at the funeral chapel.

The family of Robert Dale Bunch created this Life Tributes page to make it easy to share your memories.

Send flowers to the Bunch family.