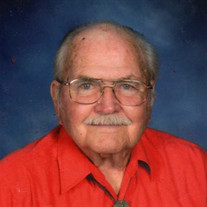 Robert Lewis Golden September 14, 1927 – November 24, 2019 Robert Lewis Golden, 92, of Bedford, passed away on Sunday, November 24, 2019 at IU Hospital in Bedford. Born September 14, 1927 in Bedford, Indiana, he was the son of Clyde E. and Geneva (Silvers) Golden. He married Phyllis Fay Asbury on July 7, 1950 and she preceded him in death on May 20, 2014. Robert was an WWII Army Veteran and later retired from Crane. He was a lifetime member of NRA and attended Faith Mission Church. Surviving are his seven children, Jennifer (Scott) Hiles of Bedford, John S. (Julia) Golden of Kansas, Robbi (Jack) Blanton of Bedford, Joetta (Terry) Osborne of Mitchell, Leann (Dale) Belcher of Mitchell, Philip (Roxann) Golden of Mitchell, Timothy D. (Lisa) Golden of Mitchell; 19 grandchildren; several great-grandchildren; one great-great-grandson. He was preceded in death by his parents, wife, and one brother, John Ervin Golden. Funeral services will be at 2:00 P.M. on Wednesday, November 27, 2019 at Ferguson-Lee Chapel of Thorne-George Family Funeral Homes, with Pastor Aaron Wardlaw officiating. Burial will be at Knott Cemetery. Visitation will be from 10:00 A.M. until the hour of service on Wednesday, November 27, 2019 at the funeral home. Online condolences may be sent to the family at www.fergusonlee.com.

The family of Robert Lewis Golden created this Life Tributes page to make it easy to share your memories.

Send flowers to the Golden family.