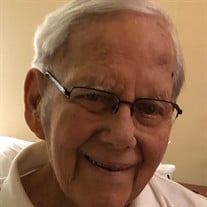 Robert Moore Kindred February 12, 1929 – February 17, 2019 Robert Moore Kindred, 90, of Bedford, passed away on Sunday, February 17, 2019 at IU Health Hospice House, Bloomington. Born February 12, 1929, in Lawrence County, Indiana, he was the son of Bart and Gladys (Moore) Kindred. He married Shirley Browning on August 14, 1953, and she preceded him in death in April 2017. Robert was a veteran of the United States Army. He worked as a mechanic at Bear Alignment before going full time in the Indiana National Guard, where he retired after more than 20 years of service. He was a graduate of Bedford High School Class of 1947 and later earned an Associate’s Degree from Devry Institute. Robert was a member of Restoration Church of the Nazarene and the Good Sam’s Camping Club. He enjoyed IU basketball, cars, woodworking, and spending time with his family. Surviving are his son, Mark Kindred, of Bedford; daughter, Melinda (Brad) Scott, of Bedford; grandchildren, Aaron (Rachel) Kindred, of Seymour, Shelby (Chris) Easterday, of Bedford, and Sydney Henderson, of Bedford; great-grandchildren, Garrett, Jaylah, Oliver, Nel, Eli, and Treyton; and several nieces and nephews. He was preceded in death by his parents; wife, Shirley; son, Mike Kindred; brother, Richard Kindred; and two sisters, Georgia Kindred Lantz and Mina Kindred Seidle. Funeral service will be at 11:00 A.M. on Friday, February 22, 2019 at the Ferguson-Lee Chapel of Thorne-George Family Funeral Homes with Pastor Ken Bushey officiating. Burial will follow in Cresthaven Memory Gardens. Visitation will be from 4-8 P.M. Thursday and from 10 A.M. until the service hour Friday at the funeral chapel. Memorial contributions may be made to the National Kidney Foundation, in honor of Robert Moore Kindred.

The family of Robert Moore Kindred created this Life Tributes page to make it easy to share your memories.

Send flowers to the Kindred family.