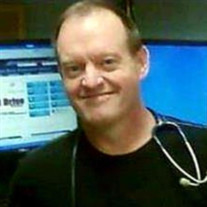 Rory Trent Bough April 18, 1962 – November 9, 2020 Rory Trent Bough, 58, of Bedford, passed away on Monday, November 9, 2020 at Indiana University Hospital in Indianapolis. Born April 18, 1962, in Bedford, he was the son of Hubert Bough and Ronda (Holtsclaw) Dixon. Trent was a graduate of Mitchell High School class of 1980; attended Indiana State University, Anderson University and finished up his nursing degree at Ivy Tech; and he worked as a Registered Nurse for the Veteran’s Administration at Bloomington CBOC. Trent attended Donica Church of God and was a Veteran of the United States Army serving with the Combat Engineers. He was a member of Sigma Chi Fraternity. Trent was an avid fisherman, loved nature, mushroom hunting, being out on the lake, and spending time with his dogs. Surviving to cherish his memory are his mother and step-father, Ronda and Jack Dixon; siblings, Brad Bough, Aaron “JJ” (Glenda) Bough, and Korina Dusard; nephew, Hank Dusard; niece, Josie Bough; great-niece and great-nephew, Penelope and Oliver; uncles, John (Darlene) Bough and Roland (Trudy) Holtsclaw; and several cousins. He was preceded in death by his father, Hubert Bough; and brother-in-law, Tom Dusard. Funeral service will be at 11:00 A.M. on Friday, November 13, 2020 at the Ferguson-Lee Chapel of Thorne-George Family Funeral Homes. Military rites will be conducted by members of the American Legion Gillen Post #33. Visitation will be from 9 A.M. until the service hour on Friday.

The family of Rory Trent Bough created this Life Tributes page to make it easy to share your memories.

Send flowers to the Bough family.