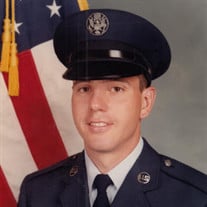 Russell Mark Hiatt came into this world on a stormy evening in Lakewood, Ohio, on May 12, 1956. He was born of two proud parents, Clarence Roger and Dorothy (Roglin) Hiatt. Russ felt grateful to have had good employment and good co-workers during his career. He felt especially blessed for the good friends, family, loving wife Clara, and his Lord Jesus. After graduating from Buckeye High School in Medina, Ohio, in 1974, Russell held various jobs until graduating from Owens College in 1982 with a degree in Diesel Technology. He joined the US Air Force in 1984. He served his country overseas and at home for the next 10 years. Russell began as a Propulsion Tech Jet Engines, progressed to Crew Chief, and then as Technical Training Instruction, Aerospace Propulsion Craftsman, Jet Engines for many years. Among the many medals, badges, and citations Russell earned include AF Outstanding Unit Award, National Defense Service Medal, served in support of Desert Shield/Storm, Small Arms Expert Marksmanship, and the AF Training Ribbon. Russell felt honored to serve his country as a peacekeeper. He truly believed in the concept of Peace Through Strength. After honorable release from Active Duty from the Air Force, he continued to serve his community by joining the Decatur Township School Transportation Department as a bus mechanic. In charge of the School Bus Fleet, Russ was responsible for the safe and reliable operation of over 100 school busses serving over 5,000 children in the district for 12 years. In 2007, Russ joined the NAPA organization as a Freight Delivery Truck Driver. Russ was appreciative and grateful for being totally accepted into the NAPA team upon joining as a new driver, when everyone else on the crew already had 25-30 years at NAPA. In 1987, he married his High School Sweetheart, Linda Hall. Their love lasted less than a year, before she lost her battle with cancer. While still in the service, he met the love of his life, Clara (Beavers). They were married in 1990 and shared a wonderful life together for 31 years. On October 26, 2021, we rejoice that after a battle with Covid-19, Russell has joined the Church Triumphant. He left his world on a peaceful morning surrounded by family and loved ones. Russell would like to let everyone know, that in his life, he always did his best to serve his employers, his friends, his family, and his Lord. A very special shout out to all the hard-working caregivers and staff at Community South Hospital, for their care and compassion during his stay. Russell is survived by his wife, Clara (Beavers) Hiatt; brother, Ronald (wife Gretchen); brother, Randall (partner Shirley Pirl); and step-son, Allen Stultz. Russell was preceded in death by his mother, Dorothy Lantz, and father, Roger Hiatt. The funeral service will be at 1:00 P.M. on Saturday, October 30, 2021, at the Ferguson-Lee Chapel of Thorne-George Family Funeral Homes in Bedford. Burial will follow in Proctor Cemetery. Visitation will be from 10 A.M. until the service hour on Saturday at Ferguson-Lee Chapel. Due to the Covid-19 pandemic, the family requests that masks be worn. Online condolences may be sent to the family at www.FergusonLee.com.

Russell Mark Hiatt came into this world on a stormy evening in Lakewood, Ohio, on May 12, 1956. He was born of two proud parents, Clarence Roger and Dorothy (Roglin) Hiatt. Russ felt grateful to have had good employment and good co-workers... View Obituary & Service Information

The family of Russell Mark Hiatt created this Life Tributes page to make it easy to share your memories.

Russell Mark Hiatt came into this world on a stormy evening in...

Send flowers to the Hiatt family.