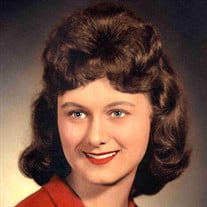 Sherrlyn C. Lessig April 25, 1944 – November 11, 2020 Sherrlyn C. Lessig, 76, of Bedford, passed away on Wednesday, November 11, 2020 at IU Health Bloomington Hospital. Born April 25, 1944, in Lawrence County, she was the daughter of Herman and Dorothy (Turley) Williams. She married Rick Lessig on December 31, 1976, and he preceded her in death on January 9, 1995. Sherrlyn was of the Christian faith, loved spending time with her grandchildren and great-grandchildren, and was a homemaker. Surviving to cherish Sherrlyn’s memory are her daughter, Kelly (Mike) Mosier, of Bedford; two step-daughters, Dawn Borden, of Arkansas and Dianna (Ed) Proutt, of Arkansas, six grandchildren, Kristney (Rusty) Coomer, of Springville, Joshua (Karen) Root, of Bedford, Coreylyn (Tyler) Marshall, of Bedford, Gage (Shelby) Mosier, of Bedford, Kelby (David) Smith, of Bedford, and Nick Mosier, of Japan; eleven great-grandchildren, Noah, Carter, Caden, Rylyn, Jack, Parker, Kingston, Braxon, Maddox, Hailey, and Taj. She was preceded in death by her parents; husband, Rick; one daughter, Paula Nelson; and one brother, Robert Williams. Funeral service will be at 1:00 P.M. on Saturday, November 14, 2020 at the Ferguson-Lee Chapel of Thorne-George Family Funeral Homes with Phil Thorne officiating. Burial will follow in Green Hill Cemetery. Visitation will be from 11 A.M. until the service hour Saturday at the funeral chapel. Memorial contributions may be made to the Girls and Boys Club of Lawrence County.

The family of Sherrlyn C. Lessig created this Life Tributes page to make it easy to share your memories.

Send flowers to the Lessig family.