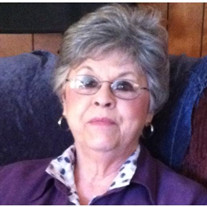 Sondra Kay Tarr, 82, of Bedford, Indiana passed on to her Heavenly home at 5:59 a.m. on Friday, August 7th, 2020, at IU Methodist Hospital in Indianapolis, IN. Born June 9th, 1938 in Bedford, Indiana she was the daughter of Norma and Daniel Jenkins. She married William C. (Bud) Tarr on September 6th, 1958, and he preceded her in death. Sondra Kay Tarr was a loving wife, mother and grandmother and was remembered by many as a very compassionate and caring person. Her most cherished title was “Mother” to her adopted daughter, Amy Jo, whom she cared for at home, until 10 months ago, when Amy’s new residence became White River Lodge. Amy was born out of Kay’s heart and taking care of her was Kay’s lifelong mission. Kay was a caregiver at heart and was always more concerned about others than herself. She was dedicated to her Father, God and her Lord and Savior, Jesus Christ. She knew His word and stood strong as a faith filled believer. She enjoyed the beauty of God’s creation, especially flowers, as she could always identify and name any variety or species. She is survived by her daughters, Tracy (Kevin) Yeary, Amy Jo Tarr and son-in-law Jeff Chastain. Beloved grandchildren; Matthew Chastain, Jason (Melanie) Chastain, Hannah (Jordan) Burcham and Clinton Yeary. Great grandchildren; Lucas, Peyton, Emily, Dylan, and Lillie Chastain. Step great grandchildren Logan and Garrett Blake, as well as many nieces and nephews. Also surviving is her sister Carole Miller and brother James Jenkins. She was preceded in death by her parents Norma and Daniel Jenkins, daughter Taryn Chastain, grandson David Chastain, brothers; John and Mike Jenkins and sister Susan Jenkins. Funeral services will be at 2:00 P.M. on Thursday, August 13, 2020 at the Ferguson-Lee Chapel of Thorne-George Family Funeral Homes. Burial will follow in Green Hill Cemetery. Visitation will be from noon until the service hour at the funeral chapel.

Sondra Kay Tarr, 82, of Bedford, Indiana passed on to her Heavenly home at 5:59 a.m. on Friday, August 7th, 2020, at IU Methodist Hospital in Indianapolis, IN. Born June 9th, 1938 in Bedford, Indiana she was the daughter of Norma and Daniel... View Obituary & Service Information

The family of Sondra Kay Tarr created this Life Tributes page to make it easy to share your memories.

Sondra Kay Tarr, 82, of Bedford, Indiana passed on to her Heavenly...

Send flowers to the Tarr family.