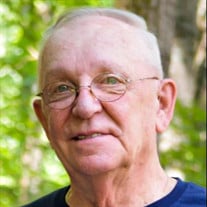 Terry L. Terrell, age 77, of Shoals, Indiana passed on November 24, 2021 at his residence. He was born on May 22, 1944, to Roy and Nellie (Thomas) Terrell in Forest, IN. He married Beverly A. Henson on August 27, 1982. They lived in Kokomo, Indiana where Terry worked at Chrysler for thirty-five years; then retired and moved to Shoals, IN in 1999. Terry was a United States Army Veteran, and was a member of the Loogootee Christian Church, the V.F.W. and the Shoals Eagles #2442. He loved Notre Dame football and passed that love down to his children and grandchildren. He is survived by three children, Thomas Eric (Samantha) Terrell of Kokomo, Lori Beth Wheasler of Danville, and Stacy Joanne Wright Terrell of Shoals; eight grandchildren, ten great grandchildren; sisters, Patricia (Kenny) Parker, Forest, IN, Nancy Tate, Forest, IN; and brothers, Jerry (Anna) Terrell, Fayette, MO, and Richard (Diane) Terrell, Forest, IN. He was preceded in death by his parents, Roy and Nellie Terrell, and one sister, Betty Jewell. Funeral services will be held at 2:30 PM Saturday, November 27, 2021, at the Queen-Lee Chapel in Shoals officiated by Pastor Colleen Harden. Burial will follow in the Pleasant Valley Cemetery. Visitation will be 1:00 PM Saturday until the time of service.

The family of Terry L. Terrell created this Life Tributes page to make it easy to share your memories.

Send flowers to the Terrell family.