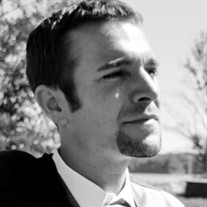 Tyson H. Johnson, 40, of Padanaram Village in Martin County, passed away on Friday, December 17, 2021. Born October 16, 1981, he was the son of Timothy E. Johnson and Kathleen A. Wright. He married Tina Todd on August 1, 2015, and she survives. Tyson was a graduate of Shoals High School and was a painter and contractor. He was a generous artist with a heart of gold. Surviving Tyson is his wife, Tina; five children, Skyy Shake, Zayne Shake, Addy Johnson, Thairon Johnson, and Rowan Johnson; his mother, Kathleen Wright; his father, Tim Johnson; five siblings, Ferrol Johnson, Esther Johnson, Arthor Johnson, Mann Johnson, and RoseSarrha Johnson; two nephews, Bensen Davis and Sabre Johnson. Services for Tyson H. Johnson will be at 1:00pm Monday, December 20, 2021 at the Padanaram Village. Burial will follow in Holy Ground Cemetery. Visitation will be from Noon to 1:00pm at Padanaram Village. Services for Tyson have been entrusted to the Ferguson-Lee Chapel of Thorne-George Family Funeral Homes. Online condolences may be sent to the family at www.FergusonLee.com.

The family of Tyson H. Johnson created this Life Tributes page to make it easy to share your memories.

Send flowers to the Johnson family.